The NYTimes has an opinion article, For Cuba, a Harsh Self-Assessment that deplores the decline in “gentility and respect”, echoing Raul Castro’s “get off my lawn” speech of two weeks ago. The article doesn’t question Raul’s premise,

“I have the bitter sensation that we are a society that is ever better educated, but not necessarily more enlightened,” Mr. Castro said.

Ever better educated? You mean like the doctors sent to Brazil and the Jamaican nurses, which were rejected because they don’t meet basic job requirements?

All through the article, the message is that the golden age of Communism brought free healthcare and education back when “a state salary was enough to live on without needing to pilfer.” Of course, Fidel Castro himself repeated incessantly that under him, Cubans are “the most cultured people in the world,” even the prostitutes, while redoing the excellent, definitive Don Quijote de la Mancha 4th Centenary edition by the Real Academia Española. Fidel had Hugo Chavez abridge it, remove the essay “Una novela para el siglo XXI” by long-time foe Mario Vargas Llosa, and replaced that essay with a short preface by José Saramago, a much friendlier Communist. The Communist regime can’t have “the most cultured people in the world” exposed to an essay which essence is that Don Quijote’s a free men’s novel.

Cuba sets great store by its cultural prestige. After the 1959 revolution, the government set out to purge the decadence that made Havana a magnet for Americans, among others. The state started a national literacy campaign, offered free education to all and established rigorous sports, ballet and music programs.

Because, you know, the Americans are the ones attracted to the decadence. Unlike, of course, the Canadian and Spanish pervs who go today to Havana for the sex trade.

The article posts a photo of shirtless men slaughtering a pig on a sidewalk, under the most unsanitary conditions, 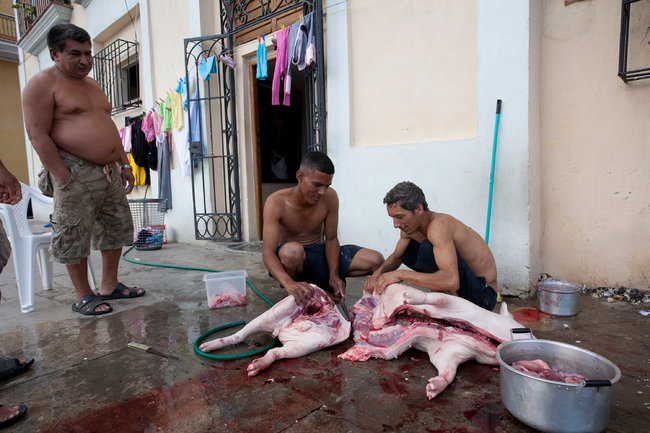 with the caption (emphasis added)

A pig being slaughtered in a tourist area of old Havana is seen as a sign of a loss of civility.

when in fact it is emblematic of the decay of Cuban culture under Communism. Carlos Erie, who lived in Cuba and remembers, lets it rip,

Proof positive of the ignorance and prejudice that govern the thinking of those who write and publish such poison is evident in the photo above. The caption under the photo is the one used by the NYT. Notice, please, that slaughtering a pig on the street is merely “seen” as a “sign” of loss of civility. It’s not really a loss, but is merely “seen” as such by some Cubans. And, notice, that the act itself is not “seen” as a loss of civility, but as a mere “sign” — which means, of course, that it’s not just the behavior that is open to interpretation, but also the act of passing judgment on it. Notice, too, that the slaughtering is described as taking place in a “tourist” area of Old Havana. One must assume that it would be perfectly alright in some other area where tourists don’t dare to go, and that this is something Cubans have been doing for centuries in their own benighted slums. It is also assumed that this is somehow normal for Cubans: to go shirtless in “tourist” areas. Savages.

The Times will never disappoint you . . . if all you expect them to do is echo Raul’s propaganda.