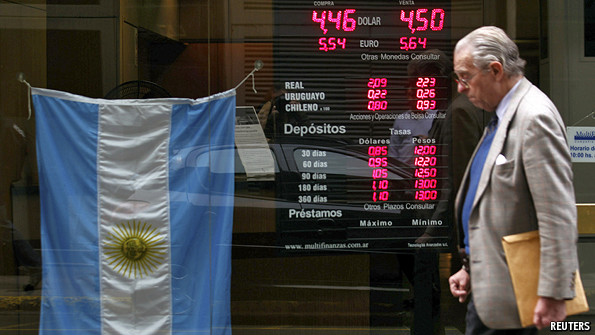 According to this MercoPress report, Over a third of Argentine population in poverty conditions says food and nutrition report; And, what’s worse,

At least 17.8% of the Argentine population lives in indigence conditions, taking as reference a ‘Healthy Food Basket’ which estimates family monthly needs in 3.700 Pesos which is more that five times the official stats office Indec reference sum of 730 Pesos.

Earlier today I mentioned The Troubled Currencies Project; as you can see in it, Argentina’s implied annual inflation rate of 24.60% is more than twice the official 10.34% rate.

Earlier this year the International Monetary Fund made a motion of censure over the country’s failure to comply with the fund’s rules on the reporting of statistics.