Following up on yesterday’s post on Iran’s infiltration in Latin America, 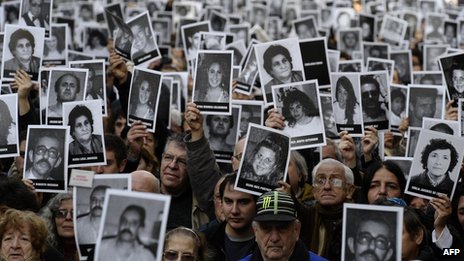 In his report, Mr. Nisman contended that the 1994 bombing was not an isolated event. “It has to be investigated as a segment in a larger sequence,” he said in a report summary, pointing to parallels with the case of two Guyanese men convicted in 2010 of conspiring to attack Kennedy International Airport in New York.

In that case, a former Guyanese government official, Abdul Kadir, opened himself to a claim by prosecutors in New York that he secretly worked for years as a spy for Iran when he said during cross-examination that he had drafted regular reports to Iran’s ambassador in Venezuela on plans to infiltrate Guyana’s military and police. The plot to attack the airport did not advance beyond the conceptual stage.

Mr. Nisman, who has investigated the bombing since 2005, suggested that “criminal plans” by Iran could be under development in Latin America, including Brazil, Chile, Colombia, Guyana, Paraguay, Suriname, Trinidad and Tobago and Uruguay.

And let’s not forget the direct flights fron Tehran to Caracas.

Connecting the dots, Mr. Nisman found that one of the Iranian agents in the plan to incinerate JFK—Guyanese citizen Abdul Kadir—had a “close relationship and hierarchical subordination” to Rabbini. But Kadir’s activities were supported from other countries as well. He “was very important to the plot, not only because he was a successful leader, but also due to his deeply rooted connections with Iran and its embassy in Venezuela.” And he was active in countries throughout the Caribbean, including Trinidad and Tobago; Dominica; Barbados; Antigua and Barbuda; Surinam; and Grenada. “His activity as an Iranian leader allowed him to establish and strengthen relations with other regional Islamic leaders and by 1998 he was the representative of the Secretariat of the Caribbean Islamic Movement.”

It is unlikely that either Kadir or Rabbani would have gotten as far as they did without the use of a seemingly benign activity to shield them. “The dual use of institutions controlled by the Iranian Regime, the cultural, religious and propagation activities conducted by its agents abroad and the radical indoctrination of its supporters” become operational with “the construction of intelligence stations,” the summary explains. These have “the capability to provide logistic, economic and operative support to terrorist attacks decided by the Islamic regime.”

The Economist, back in January: Argentine-Iranian relations
A pact with the devil?