A huge story mostly ignored in the USA, protests in all the major cities (link in Portugese), with 240,000 at 11 state capitals, 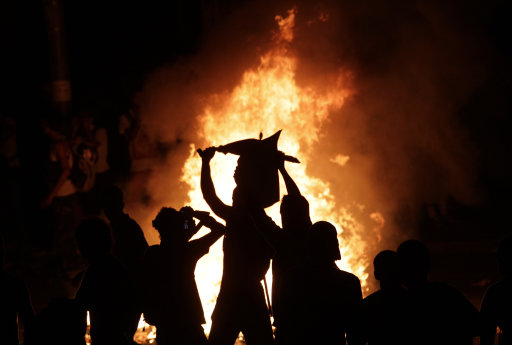 BBC:
Protests spread throughout Brazil
As many as 200,000 people march through Brazil’s biggest cities, as protests over public transport costs and the expense of the World Cup spread.

Julia Carneiro
BBC Brasil, Sao Paulo
The mass of people gathered at Sao Paulo’s Largo da Batata was impressive – but more impressive was that after the demonstration began, thousands more kept arriving, streaming peacefully towards the city’s main avenues in a constant flow.

Their bright banners bore diverse demands – but all reflected a fatigue with what people here get from the state. I repeatedly heard the word “tired”: protesters told me they were tired of corruption, of nepotism, of high taxes paid for poor public services. 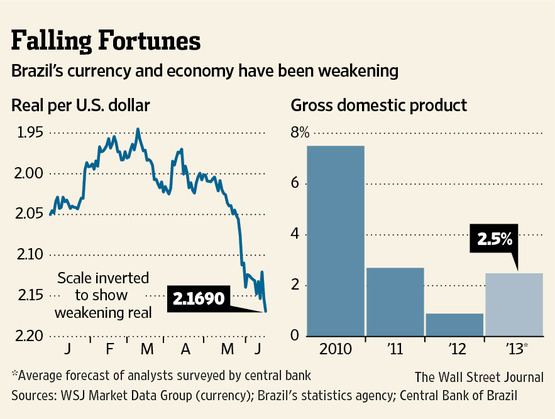 WSJ:
Anger Spills Onto Brazil’s Streets
Tens of thousands of Brazilian marchers gathered in São Paulo and in other cities after a small protest against bus-fare increases last week blossomed into demonstrations against everything from overspending to build World Cup stadiums to corruption.

“The protests on the street go straight to the heart of the long-term problems of Brazil, a series of complaints that are hard to fix, and a sense of business as usual in government,” said Matias Spektor, an author and associate professor at Brazil’s Getulio Vargas Foundation university. “The political climate has changed.”

One issue surging to the fore involves anger over stadium projects in various cities ahead of the 2014 World Cup, which Brazil is preparing to host. Some projects have been hindered by cost overruns and delays, the unfinished structures standing as testament to an injection of resources into sports arenas at a time when schools and public transit systems need upgrades.

The huge expenses involved with the upcoming World Cup and Olympics have been criticized by many Brazilians for years; it’s only now that it’s coming to a head.

Meanwhile, the Joao Havelange stadium in Rio, to be used at the 2016 Olympics, will not open before 2015 due to roof repairs.

More photos of the demonstrations at Noticias 24.