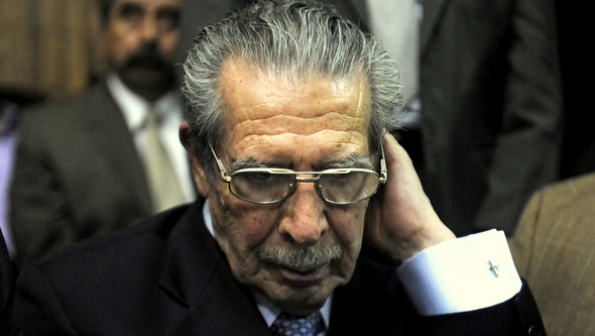 Former dictator José Efraín Ríos Montt is now the first person ever to be convicted of genocide in a court of his own country for the murders of Ixl Mayans:
A historic verdict in Guatemala
Genocidal general

Amid cheers from the gallery and chaos in the courtroom, the judge, Jazmín Barrios, part of a three-person tribunal, immediately ordered General Ríos Montt to be taken to jail. Until then, he had been under house arrest. His conviction came a day after he broke a silence that he had maintained throughout weeks of testimony. He had hotly declared his innocence, showing particular antipathy to the charge of genocide, saying he had never authorised attacks on any ethnic group,

However, in reaching her verdict, the judge pointed to evidence of a pattern of army massacres that she said appeared to follow plans that were ordered from the top. In proving genocide, she said there was evidence that 5.5% of the Ixil ethnic group had been wiped out by the army, even though she said they were civilian farmers. And she said General Ríos Montt, knew what was going on in the villages where the massacres and bombardments were taking place, and didn’t order a halt to them. However, she acquitted his co-defendant, the general’s former intelligence chief, José Rodríguez Sánchez.

In her remarks the judge dwelt on the brutality that led to the killing of 1,771 Ixils, relayed by almost 100 witnesses during the trial that started on March 19th. She spoke of babies being killed in the womb, of gang rapes by soldiers, and of mass graves showing evidence of violent death. She praised the Ixil witnesses for speaking out about their suffering, noting that the psychological scars still persisted, even among generations who were not alive when the atrocities were committed.

A civil war ravaged Guatemala for 36 years, from 1960 to 1996. PBS Newshour has a timeline of events. Violence and intimidation continue to be a major problem in political and civilian life.