The apparent mass abduction purportedly happened sometime between 10am and noon on Sunday morning just off the Paseo de la Reforma, the city’s main boulevard, near the Angel of Independence monument and in the same district as the U.S. Embassy.
The incident was the second recent high-publicity blemish for the city’s largely unregulated entertainment scene, coming 20 days after the grandson of American civil rights activist Malcolm X was beaten to death at another bar in the downtown area.

“I’m deeply troubled by the findings by Alberto Nisman, whose 500-page indictment cites extensive evidence of Iran’s ‘intelligence and terrorist network’ in various Latin American nations. This report shows clearly that the 1994 AMIA bombing was not an isolated event, but rather that it was part of a larger and still ongoing scheme by the Iranian regime and its proxies to expand their influence in the Western Hemisphere and threaten U.S. security interests in the region.

“This indictment reaffirms the fact that Iran’s dual use of diplomatic and cultural offices is utilized to deepen its infiltration into the Hemisphere. In particular, the indictment implicates the fugitive Mohsen Rabbani, the mastermind behind the AMIA bombing, as the primary coordinator of Iran’s nefarious activities in the region. Another disturbing example cited in the indictment which demonstrates the scope of Iran’s activities is that of the two Guayenese men who were convicted in 2010 for conspiring to carry out a terrorist attack on JFK airport in New York. These examples underscore the danger that the Iranian regime presents not only through its nuclear program, but also through its unrelenting efforts to export its violent radicalism to our own Hemisphere

I may remind you that Iran’s Minister of Defense is the mastermind of the AMIA attack.

El Salvador’s highest court on Wednesday denied an appeal from a woman with a high-risk pregnancy to be allowed to undergo an abortion, upholding the country’s strict law banning abortion under any circumstances.
Related

Connect With Us on Twitter
Follow @nytimesworld for international breaking news and headlines.
Twitter List: Reporters and Editors
Beatriz, a 22-year-old woman who asked that her last name be withheld to protect her identity, has lupus and related complications that doctors say will get worse as the pregnancy, which is in its 26th week, continues, possibly leading to serious illness or even death.

Her fetus, which has anencephaly, a severe birth defect in which parts of the brain and skull are missing, has almost no chance of surviving after birth, leading her doctors to urge an abortion to protect Beatriz’s health before it deteriorates further.

We could discuss whether the court in El Salvador is “misogynistic,” but I would like to direct discussion toward how we — especially Americans — think about access to late-term abortion. Let’s say Woman A has a health problem (like lupus) that makes pregnancy risky, but she chooses to go forward with the pregnancy, because she wants a child. Later, past the point of viability, a serious birth defect becomes apparent, and she assesses the risk differently. She wants to abort because of a combination of the health risk and the low value she puts on the specific unborn child she knows she is carrying. Woman B has no health problem, but she finds out, equally late in a pregnancy, that her child has the same birth defect. There are 3 moral positions available: 1. Neither woman should be permitted to have an abortion, 2. Both women should be permitted to have an abortion, and 3. Woman A must be permitted to have an abortion, but Woman B must be forbidden.

I think position #3 is hard to understand and suspect that those who are arguing for position #3 are setting up the argument for position #2. It seems that the supposed appeal of Beatriz’s case is that her baby is relatively worthless, but if we are willing to mark some severely disabled human beings as low value, why shouldn’t any woman be able to avoid the pains of late pregnancy and childbirth? That is, we move toward position #2. But if you commit to the right to life and say — like the right-to-life spokesperson at the link — that you must protect “all human beings however small, poor, vulnerable or defenseless,” don’t you have to go to position #1, at least until the point where the medical procedure to be performed is for the precise end of saving the woman’s life and not aimed at destroying the child? 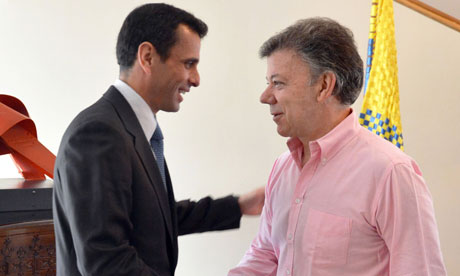 Henrique Capriles to set off the alarms before international bodies
Venezuelan opposition leader Henrique Capriles Wednesday condemned the “non-compliance” with the election audit requested by the opposition alliance and endorsed by the Union of South American Nations (Unasur). He lambasted the steps taken by Venezuelan electoral authorities

“An agreement was reached with Unasur to conduct a (comprehensive) election audit. The audit did not take place. What they (Venezuelan electoral authorities are doing is a farce.”

The Maduro regime is furious that Colombia’s president Santos met with Capriles,

The Maduro government has vilified Capriles as a “fascist” trying to stir a coup in Venezuela, and powerful Congress head Diosdado Cabello, who is also the No. 2 in the ruling Socialist Party, was the first to complain about the meeting in Bogota.

“Colombia must clarify if the government is with Capriles’ coup intentions, or with the people of Venezuela and with the legitimate, sovereign and constitutional government of comrade Nicolas Maduro,” Cabello told state media.

“President Santos is putting a bomb in the good relations that President Chavez urged so much … He is receiving a murderer, a fascist right there in his palace.”

Considering Venezuela’s ever-increasing reliance on Colombia for food, Cabello would do well to measure his words.

As a side news, Santos apparently has been comparing Alvaro Uribe to Caligula. An unwise slip of the tongue, considering how Uribe retired from the presidency with a 75%+ approval rating, but I digress.

Jaime Bayly traveled to Colombia on Tuesday to interview Capriles (videos in Spanish), which aired on MeagaTV and Capriles.tv last night.

Bayly will broadcast the second hour tonight on MegaTV, which posts the Bayly programs on YouTube the following morning. I’ll post the YouTubes tomorrow.

You can also listen to the archived podcast at your convenience. 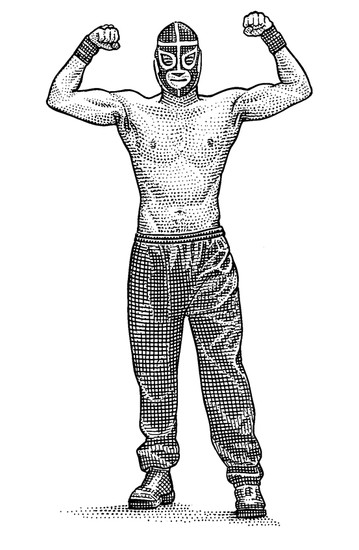 Two employees of the US embassy in Venezuela were shot and wounded early Tuesday in the capital Caracas, in a murky incident that local media and a police source said took place at a strip club.
…
US diplomatic sources later confirmed to AFP that the two men were shot.

The Venezuelan media identified the two men as Roberto Ezequiel Rosas and Paul Marwin, and said they were military attaches at the embassy, but neither the State Department nor the embassy in Caracas would confirm those reports.

“My understanding is that they are other agency personnel, not from the State Department,” Ventrell said.

Apparently there was a fight, and it was a bordello, not just a strip club, in the basement.

“Television, I mean CNN, CNN en Español, is a broadcaster that works at the behest of destabilization, that calls openly for a coup d’etat in Venezuela,” Maduro said in a speech carried by state television, according to Colombia’s Radio Caracol. “CNN en Español has become the starting point to promote an intervention against our country.”

More important news in Venezuela is the change in ownership of Globovisión, the beleaguered TV station that dared show the opposition’s point of view. Miguel Octavio writes about how this Important Media Window Now Closed For Venezuelan Opposition

Seems to me that the regime is doing its best to make the opposition seem invisible. From there, to making them disappear is only a few steps.