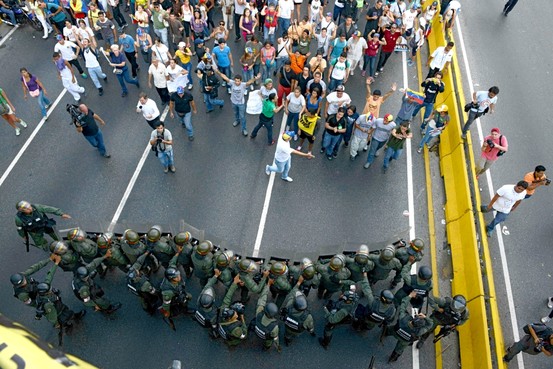 After disputed presidential elections in Venezuelan, Doral can expect a new wave of immigrants from the South American country who could increase the population by 40 percent in the next two years, Mayor Luigi Boria said Monday.

Tensions Surge in Venezuela After Vote
Chávez Successor Sworn In Despite Calls by Opposition, U.S. for a Recount

Tension in Venezuela rose sharply Monday after the government reneged on its promise to carry out a full recount of the bitterly contested presidential vote and declared acting President Nicolás Maduro as president-elect.

The opposition, pointing to irregularities in the election, said it wouldn’t recognize the result and began to demonstrating across the country, as the U.S. urged a vote recount.
…
Some 100,000 expatriate ballots haven’t yet been counted as part of the tally. In the past they have overwhelmingly backed the opposition.

Sunday night, after Electoral Council President Tibisay Lucena announced Maduro’s victory as “irreversible”, Council member Vicente Díaz remained on the podium and requested a full recount and audit of the results due to “a number of irregularities” (video in Spanish),

Yesterday Vicente Diaz decided not to go to the proclamation of Maduro as president.

However, there can not be a recount, as ballot boxes have been destroyed, according to Venezuelan twitterers,

Diosdado Cabello, head of the National Assembly, has already asserted that “there will be no vote-by-vote recount; that’s just a whim of the bourgeoisie.”

One thing is clear from the election: Chavismo will not relinquish power through democratic means.

Related:
Caracas Chronicles lists the protests across the country.