Teachers in Guerrero, one of Mexico’s poorest states, are defying Mr. Peña Nieto’s administration by opposing the education measure signed into law in February, which for the first time requires teachers to be evaluated by an autonomous body. Those that fail the evaluation can be dismissed.

Last week, tens of thousands of teachers, some armed with metal bars and Molotov cocktails, marched in Guerrero’s capital, Chilpancingo. They again blocked for hours the highway that connects Mexico City with the Pacific port of Acapulco, hurting a key economic and tourist hub. The demonstrations have been held sporadically since the overhaul bill was signed.

Since this is affecting some 42,000 students, parents are holding lessons in parks, public squares and restaurants, which in itself may be hazardous,

Initial plans to start the lessons Monday were put off for fear of reprisals from striking teachers, and the parents association is working with state authorities to guarantee safety for the classes, he added.

The lessons would be conducted like summer-school workshops, with hundreds of children expected to attend the first classes, Mr. Castro said. The idea is to teach grade-school students mathematics, Spanish and other basics, and the parents association is trying to get local education authorities to give credit for completed work.

Mexico consistently ranks near the bottom among the members of the Organization of Economic Cooperation and Development in education indicators such as average years in school and student skills, including reading.

The photo in the WSJ article is captioned, “Protesting teachers on Thursday forced their way into the Congress building in Chilpancingo where lawmakers were debating education legislation.” 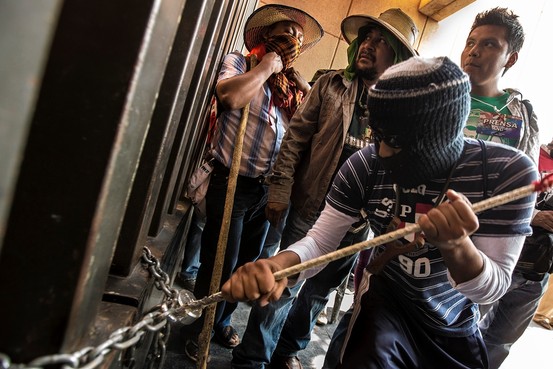 What I see is masked men breaking into a door. Thugs hired by the teachers’ union? Or are they really teachers?