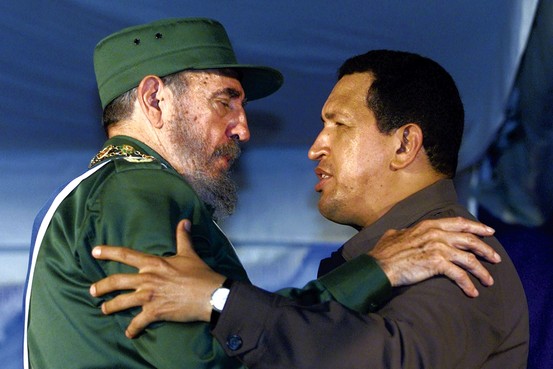 * A few days ago the medical team attending to Hugo Chavez at a military hospital in Caracas discovered a very large and fast-growing tumor in his left lung. The tumor covers about 35% of that lung.

* Chavez was immediately moved from the military hospital to the presidential residence on the remote island of La Orchila, about 100 miles north of  Caracas.

* This residence in La Orchila was outfitted with medical equipment months ago, as an alternative retreat from the public eye.

* This new tumor is a much more aggressive cancer than the one that affects his pelvic region.

* Chavez’s immune system is so weakened that he cannot fight off any infection, even with the aid of antibiotics. The move to La Orchila is an attempt to isolate him as much as possible.

* To prevent infection, Chavez was removed from the military hospital in a sterile plastic bubble.

* It seems that Evo Morales, president of Bolivia, was able to visit Chavez at La Orchila.

* Chavez’s doctors have given up on saving his life, but are doing everything they can to prolong it, even if just for a few days or weeks.  At present he is only receiving palliative care, and no recovery is expected.

* Despite all dire reports and rumors, nearly 60% of Venezuelans expect Chavez to fully recover and assume his post as president.

Chavez has been undergoing “tougher” new treatment for cancer including chemotherapy at the military hospital where he has been for the last two weeks, his vice-president said.

Certainly not an optimistic report. Is Maduro paving the way for worse news?

The Future of ‘Cubazuela’
The ties between Castro and Chávez have kept the island nation afloat. What now? The ties, and a heck of a lot of money:

Cuba, ruled by the Castro brothers since 1959, has a lot to lose if Mr. Chávez dies. Since 2007, Venezuela has provided the Communist island nation about $10 billion a year in economic aid, mostly in the form of cut-rate oil and inflated payments for thousands of Cuban doctors and other professionals, according to the University of Miami’s Cuban-studies center. Total aid and investment from Venezuela now amount to about 22% of Cuba’s annual economic output, said Carmelo Mesa Lago, a professor emeritus at the University of Pittsburgh.

If the relationship between Havana and Caracas were to end or falter, many Cubans fear that the island’s threadbare economy could be pushed into depression, as in the early 1990s, when Cuba lost Soviet aid and its economy plunged by about 40%. “It could lead to a social upheaval,” said Riordan Roett, the head of Latin American studies at Johns Hopkins University.