I’ve always felt that immigration’s problems are related to assimilation. Here’s what’s in the news today, 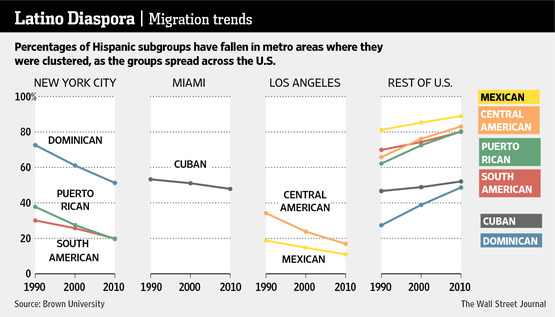 South Americans, Puerto Ricans and Cubans are settling among the existing U.S. population more readily than Mexicans, the nation’s largest Hispanic group, a trend with implications for politics, the economy and other areas of daily life.
…
South Americans, including Argentines and Venezuelans, have the highest levels of education and are the least segregated from other ethnic groups in the U.S., even if they are more recent arrivals, according to the study.

There are two dozen Spanish-speaking countries in the Americas. Each one of those countries is as unique as countries can be. Their histories are different, their customs, foods, music, traditions, and even their slang, are different. Every “Hispanic” country has peoples of every ethnic origin, race, religion, economic status, family size, educational background, physical size and build, level of work skills, and intellectual and mental ability. You will find this to be the case even more dramatically in all cities with large ports, and in resort areas. A lot of people from other countries who come for trade and pleasure return to settle permanently in those areas.

There are Peruvians of Japanese ancestry (and one of them became president of Peru). There are Chinese Cubans. There are English Puerto Ricans (my mother’s high school teacher’s family, for instance) – and Puerto Rico has a significant illegal alien problem from people from adjacent islands. There are German Venezuelans. There are Irish Argentinians. The Africans that were brought to Latin America from the slave trade are not all from the same areas of Africa and did not follow the same traditions. Even among the native peoples, the Peruvian Quechua are not the Chilean Mapuche who are not the Mayans of Apocalypto.

Within countries there are significant differences. For example: Among the millions of legal and illegal immigrants to the USA, there are hundreds of native associations, particularly in the South West. Do a google search for asociacion Oaxaca and you’ll find 966,000 results. The Mexicans who come from Oaxaca will tell you that they are not the Mexicans from the capital (Distrito Federal), and that they enjoy getting together with their friends from their corner of the old country, hence, the asociaciones Oaxaqueñas.

The article recognizes this fact,

Four decades ago, the federal government identified as “Hispanic” the surging mass of people with origins in Latin America and the Caribbean. They are a multiracial, multiethnic and multicultural lot: Argentines often descend from white Italians and Spaniards; Dominicans are often black. Politicians and marketers who wish to reach out to Hispanics need to be aware of the major differences among them, experts say, because they aren’t a monolith.

“Shared language is important, but it’s also important to be aware that most Mexicans are not immigrants, South Americans have relatively high education and income, and that many of the least-advantaged Hispanics are the rapidly growing number of immigrants from Central America,” Mr. Logan said.

60% of all Latinos in the USA are Mexican. Geography plays a part, too

Distance from country of origin plays a role. South Americans are less likely to be economic migrants—they often are in the U.S. to further their education or flee unrest—than Mexican and Central Americans, who usually reach the U.S. by land.

And, as a final word, WSJ commenter Giovanny Jose Arguello,

Education is the most important factor for integration, elimination of language barrier and sharing a common culture, American culture.

Sharing a common culture in your new home: a culture that you have more in common with than you might have with other Latinos.