When you’re too busy building a cult of adoration, you don’t pay attention to how crazy you sound to the outside world. 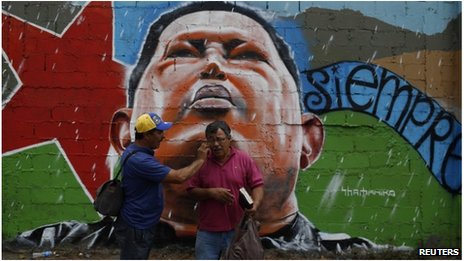 Late Venezuelan leader Hugo Chavez’s influence may have stretched into the afterlife and had a hand in Christ’s decision to opt for a Latin American Pope, acting President Nicolas Maduro said on Wednesday.

“We know that our commander ascended to the heights and is face-to-face with Christ,” Maduro said at a Caracas book fair. “Something influenced the choice of a South American pope, someone new arrived at Christ’s side and said to him: ‘Well, it seems to us South America’s time has come.'”

Not only did Hugo go to heaven to canvass Jesus for a papal candidate, but

“He (Chavez) may also call a constitutional assembly in Heaven at any moment to change the (Catholic) church on Earth so the people, the pure people of Christ, may govern the world,” Maduro added of his mentor.

Ooooky-dokes…but wait! There’s more! Just like in a Sham-Wow ad, right when you think they have sucked up all the sanity, they double the offer and it gets More Magical Than Magical Realism:

One of the latest twists: It seems that the Venenozuelan authorities will not be able to embalm his corpse after all, much less put it on permanent display in a mausoleum, like Lenin and Mao. Damn it all to hell: his corpse was not handled correctly and now top embalmers from Russia and Germany are finding it impossible to work with the mess they’ve found. BBC has the details, below.

A twist within the twist: in the Brazilian web site Alerta Total, Jorge Serrao, an independent journalist, alleges that the “corpse” on display at Chavez’s funeral was nothing more than a wax effigy, just like those found at Madame Toussaud’s. The real Chavez was such a horrific sight, claims Serrao, that he could not be displayed. All this because the cancer-ravaged corpse was mishandled in Cuba — where Chavez died, despite all denials — and also in Venenozuela, after its arrival.

“Excellent free healthcare” doesn’t translate into “mortuary service,” so they put up a dummy.

So, add this deception to that of the empty coffin in the seven-hour parade. And to that of the photoshopped pix of the hale-and-hearty Chavez released a few days before he croaked.

And, that’s not all. There are also twists within the twists within the twists: The Venenozuelan authorities keep insisting that Chavez was murdered by the Americans and Israelis, and that his murder was very similar to that of Yasser Arafat. They are calling for an international investigation of this latest attempt by the Americans and Zionists to rid the world of good righteous leaders.

And…. a twist within all those other twists: Interim president Nicolas “Saddamito” Maduro claims that his security forces ‘discovered’ a plot to kill opposition presidential candidate Enrique Capriles, and that Venenozuelan state security forces were now protecting Capriles around the clock.

So, what to do with the body? (h/t Café con Libertad). Mummification has been ruled out.

Plan b, then: find a really big coffin, like Napoleon’s at Les Invalides, and display it at the new Bolivar mausoleum,

After all, isn’t that what it was built for?