What is left, instead, after Chávez? A gaping hole for the millions of Venezuelans and other Latin Americans, mostly poor, who viewed him as a hero and a patron, someone who “cared” for them in a way that no political leader in Latin America in recent memory ever had. For them, now, there will be a despair and an anxiety that there really will be no one else like him to come along, not with as big a heart and as radical a spirit, for the foreseeable future. And they are probably right. But it’s also Chávism that has not yet delivered. Chávez’s anointed successor, Maduro, will undoubtedly try to carry on the revolution, but the country’s untended economic and social ills are mounting, and it seems likely that, in the not so distant future, any Venezuelan despair about their leader’s loss will extend to the unfinished revolution he left behind.

“Hugo Chavez was a tyrant who forced the people of Venezuela to live in fear. His death dents the alliance of anti-U.S. leftist leaders in South America. Good riddance to this dictator.

“Venezuela once had a strong democratic tradition and was close to the United States. Chavez’s death sets the stage for fresh elections. While not guaranteed, closer U.S. relations with his key country in our Hemisphere are now possible.”

6:20PM Hugo Chavez Dead at 58: Good Riddance!
The controversial leader of Venezuela died today. Michael Moynihan does not mourn the passing of this autocratic showman—and says his mad dreams will likely die with him. Let’s hope Michael’s right.

6:15PM Reports claim that Diosdado Cabello, not Nicolas Maduro, is the next president:

Now would be a good time to read about the brave student protesters who resisted Hugo Chavez’s authoritarian rule: slate.me/YM9aM6

6:08PM “The rollercoaster has left the amusement park, headed for the nearest black hole at warp speed.”
Timeline: Hugo Chavez 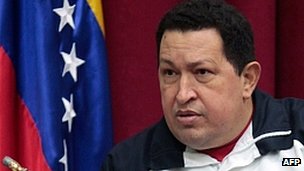 5:50PM Hugo Chávez, who transformed Venezuela from a deeply flawed democracy into a nearly flawless autocracy, is dead at 58. Richard Fernandez: “BTW, it’s 60 years to the day from Stalin’s death. March 5, 1953.”

Mr. Chávez’s death is a blow to populist governments in the region, including those of Bolivia and Ecuador, which he led in a perennial campaign against American hegemony. His death could have major economic and political repercussions for Cuba, which receives billions in virtually free oil from Venezuela.

5:05PM THE VENEZUELAN GOVERNMENT HAS CONFIRMED THAT HUGO CHAVEZ IS DEAD

Will there be an election in 30 days?

1:40PM No announcement? Is this a trial balloon? What Maduro did today is talk about Chávez in the past tense, accuse “the empire” for poisoning him (Simon Bolivar was poisoned), and put the country on alert. Shortly after, he said there will be another announcement later today.

Impeccable script made in Cuba. Well articulated. Perfect for chavismo to believe to the letter. VERY DANGEROUS

1:17PM Maduro continues to talk about Chávez in the past tense.

1:10PM Maduro announces that an American envoy, David del Mónaco, is being expelled from Venezuela. Is this the big announcement they all gathered for?

1PM Livefeed of press conference from El País (in Spanish). VP Maduro’s blaming Chávez’s illness on “the motherland’s enemies.” He has all the propaganda, without any of Chávez’s “charm.”

12:30PM Is the Post-Chávez Crisis an Opportunity for Venezuela?

12:20PM Also in the meeting, the socialist governors of 20 states.

11:53AM EST: Noticias 24 reports (link in Spanish) that Venezuela’s political and military high command is gathered at the presidential palace for an upcoming announcement.

Last night they announced that Hugo Chavez’s health had taken a turn for the worse.

I’ll update this post once the announcement is made.

Linked by Extrano’s Alley. Thank you!

Linked by Neoneocon. Thank you!

Linked by McNorman. Thank you!

Linked by Bettina Inclan. Thank you!