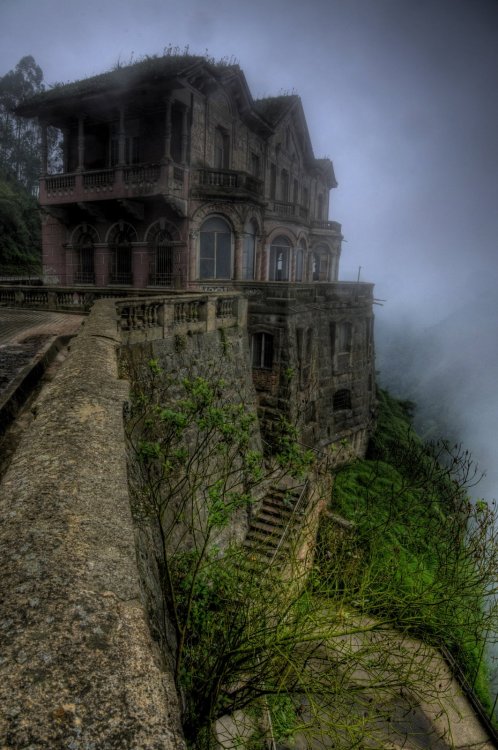 The location is the Casona del Tequendama in Colombia, which has the reputation of being haunted:

In 1924, the then-luxurious Hotel (Refugio d)el Salto was inaugurated on the cliff facing the waterfall but due to contamination of the river water, believed to be a result of the popular locale, it was closed in the early 90′s. There has been talk of reopening it and restoring it to its former glory (but as a museum or even a police station) which might help rid the place of its apparent ghosts. They are said to haunt the hotel and according to the caretaker, are believed to be from the old days when bar fights on the second story would end up on its balcony, sometimes resulting in a drunk patron losing more than the fight.

On the other hand, there are stories of those who checked out (of life) by jumping off the cliff. That’s right, despite its beauty or perhaps because of it, the falls is a place where people have been known to say their goodbyes. When one would find a letter or some sort of personal item without an owner, it was thought to have been left behind.

In the photo above, it looks haunting, like something Lord Byron would have loved,

But my Soul wanders; I demand it back
To meditate amongst decay, and stand
A ruin amidst ruins; there to track
Fall’n states and buried greatness, o’er a land
Which was the mightiest in its old command,
And is the loveliest, and must ever be
The master-mould of Nature’s heavenly hand;
Wherein were cast the heroic and the free,—
The beautiful — the brave — the Lords of earth and sea,

Or a vacation spot for the Addams family. The good news is that the French government is funding the building’s restauration along with local authorities (link in Spanish).

Let’s hope the restoration is completed and the building becomes viable.