Hillary Clinton is ending her tenure as secretary of state in fiery fashion. “You really get the sense that [Mrs.] Clinton barely managed to restrain herself from dropping an F-bomb there,” remarks New York magazine’s Dan Amira. He refers to an exchange between the secretary and Sen. Ron Johnson of Wisconsin at a Foreign Relations Committee hearing this morning.

Johnson pressed her about the administration’s conflicting explanations for the Sept. 11 attack on the U.S. Consulate in Benghazi, Libya, which killed the ambassador and three other Americans. “With all due respect, the fact is we had four dead Americans,” said the secretary snappishly to the senator. “Was it because of a protest or was it because of guys out for a walk one night decided to go kill some Americans? What difference at this point does it make? It is our job to figure out what happened and do everything we can to prevent it from ever happening again, Senator.”

So it’s “our job to figure out what happened” but it doesn’t make a difference what happened? Huh? What would we do without rhetorical questions? We suppose we’d answer them, as Commentary’s Jonathan Tobin does:

The answer to her question is clear. An administration that sought, for political purposes, to give the American people the idea that al-Qaeda had been “decimated” and was effectively out of commission had a clear motive during a presidential campaign to mislead the public about Benghazi. The fact that questions are still unanswered about this crime and that Clinton and President Obama seem more interested in burying this story along with the four Americans that died is an outrage that won’t be forgotten.

“What difference does it make?” if there were no protests in Benghazi,

Well, gosh, I can think of a few reasons why it matters. First, it mattered enough for the Obama administration to send Susan Rice to five different Sunday talk shows to insist that the sacking was a spontaneous demonstration of anger over a months-old YouTube video, while saying that there was “no evidence” that it was a terrorist attack. On one of those appearances, the president of Libya told US audiences the exact opposite — that it was the work of terrorists and that they had a pretty good idea of who they were. If it didn’t matter, what was Susan Rice doing when she tried pushing that meme, which the White House had to abandon within days as leaks within State and CIA made plain that there was no demonstration?

It also matters because Barack Obama at the time had been bragging about crippling al-Qaeda while on the campaign trail. That false narrative made it seem as though State and our intel community couldn’t have possibly known that the sacking would have occurred, and got blindsided by a grassroots reaction to the video. Instead, it turned out to be a planned terrorist action about which the US embassy in Libya had warned State for months, repeatedly requesting more security.

There’s also the matter of Barack Obama’s intervention in Libya and his undeclared war against Moammar Qaddafi. His actions, and that of NATO in following his initial lead, decapitated the ruthless regime that at least was keeping a lid on terrorist networks in eastern Libya. The rise of those networks in the Benghazi region should have been a predictable outcome from the power vacuum the US/NATO campaign left in the region, which resulted in the ability to conduct this attack. That also reflects on the decision to remove the military security at the consulate even with the deteriorating environment very clear to anyone paying attention. That also matters because of how the transfer of weapons to the militias in that US/NATO effort and the resultant power vacuum has destabilized Mali and potentially a wide swath of North Africa.

So it matters because of credibility.

And yes, “What difference does it make?” is the attitude of someone who feels entitled to their high place.

“If it weren’t for low integrity they’d have no integrity at all.” 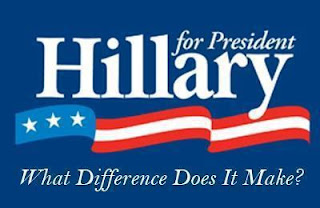 Do you think there’s any coincidence in the fact that her campaign debt was paid off and her appearance before the joint committee today to talk about the guy in Benghazi?