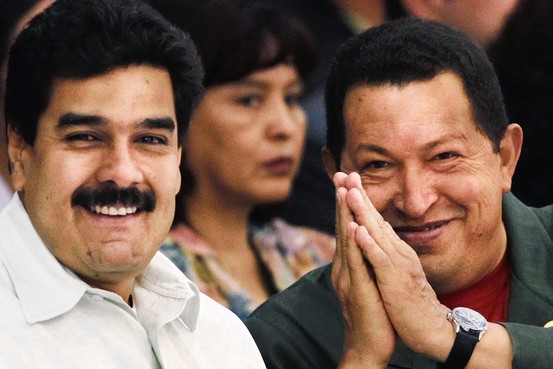 With Hugo Chavez completely out of the public eye for nearly a month, January 10 coming up, and factional infighting among Chavistas, will there be a constitutional coup?

Speculation is growing that the president’s illness, the specific details of which are being kept secret by the government, will force him from power after 14 years, despite having been re-elected in October. Mr. Chavez is set to be inaugurated into his next term Jan. 10—the date specified by the constitution.

But in a televised interview Friday night, Mr. Maduro dubbed the swearing in ceremony as just a “formality” and said that it could be postponed for the re-elected Mr. Chavez. Mr. Maduro’s comments are likely to anger opposition politicians who have said that the president’s inability to appear at the inauguration should indicate that he is too sick to rule and trigger new elections, which the constitution calls for if the head of state dies or is incapacitated.

Daniel Duquenal writes about the interview,

Today, in a normal country where the elected president is more dead than alive the powers in place would have started preparing for a transition, consulted around, etc..  Here in Venezuela the opposition is accused of all evils, is told that never shall chavismo speak to them, while we are told the constitutional provisions are optional, mere formalities.

In short, we are told that chavismo is starting a coup d’état. Or rather, is deepening the coup d’etat that started in Funerary 1999 when Chavez called for an illegal constituent assembly. Or rather, is a culmination of sorts of the coup of February 1992 when again, since 1958, it was thought OK that a small group of people decide what does goes on in Venezuela according to their personal will and interests. See, on this regard today offers no surprise for those watching Venezuela’s involution since 1992. It is just more crass, more open, more frontal, more f**k you.

I am not going into details because I did not watch the proceedings and I have just been checking late tonight what happened this Saturday in Caracas when Diosdado Cabello was sworn in president of the National Assembly for the 2013 session. By the way, should I go back to name it Nazional Assembly since the opposition is shut almost as effectively than it was in the previous monochromatic 2005-2010 assembly? suffice to say that there was a lot of hot air, a lot of insults, a lot of posturing and the opposition wisely decided to be heard but keeping it rather low profile compared to the zealous overexertion of chavismo in a deliberate ploy to provoke the opposition. Again, what else is new?

Yesterday I wrote that the reelection of Cabello meant that we would not likely have elections before March at the earliest, maybe as late as June or July. Or that actually there was an off chance that Chavez could survive and come back even on a wheel chair. And that it also meant that chavismo was getting ready to commit some constitutional violation as there is no indication whatsoever that Chavez will be in Caracas on January 10 (if he were to show up, which in an odd way would not totally surprising for me, it would confirm that chavismo is all about smoke and mirrors since they are unable to rule and solve people’s problems. But I digress).

However there is one thing that I can tell you for sure already: today’s disgraceful display is the classical, poster boy case of the insecure bully in the school yard. That is, the bully and its gang think that by screaming louder than all they may get to avoid challenge or sanctions.

The Devil’s Excrement looks at how Chavismo Seems To Be Taking The Wrong And Unconstitutional Path In Venezuela:

And while you could argue legally that Chávez can delay being sworn in, can be sworn by the Supreme Court, can be sworn in in Cuba, can be declared temporary unable to assume the Presidency, all of which are questionable from a legal point of view: About the only thing you can not possibly argue legally or in any other way, is that Nicolás Maduro can continue to be Vice-President on January 10th, but that seems to be what he is saying and how they plan to play it.

But this would be unconstitutional, because Maduro is named and removed by the President. There is no way to interpret or suggest that his nomination, or that of the Cabinet for that matter, can be extended beyond Jan. 10th. On Jan. 10th. a new Constitutional period begins, there is a reset. Reelection is not the continuation of a mandate, it is a new mandate and in Venezuela’s Constitution it has a new date for its beginning. Thus, for Nicolás Maduro to continue being Vice-President after Jan. 10th. unless Hugo Chávez is sworn in, would be absolutely illegal and a break in Venezuela’s Constitutional order. A coup, no matter how yo[u] try to spin it. A very clear one at that.

So far, the Cuban regime is orchestrating the Venezuelan transition; will the people of Venezuela let them get away with it?

Venezuela After Chávez
Regardless of whether the president makes it to his inauguration, the angling to replace him has begun.

Linked by Maggie’s Notebook. Thank you!