The power struggles in Venezuela are on, and Raul Castro and his cronies are stepping in:

Today’s Nuevo Herald reports that Cuba’s Communist regime is behind Venezuela’s transition. Under their plan, National Assembly president Diosdado Cabello would be interim president until a new election is called, with Nicolas Maduro, the current VP, as presidential candidate. Cabello will continue as National Assembly president, but with additional powers and influence. (You can read the whole thing here (in Spanish). La Patilla has more.)

At the same time, the Finance and Economics minister, Jorge Giordani, has been asked to stay, and to negotiate a grace period with China on debt payment. The objective is to issue more bonds, increase liquidity and bankroll more misiones for a year. Venezuela has been borrowing at credit card rates for quite a while.

Of course, Cuba would continue to get those Venezuelan oil shipments. One can’t help but wonder how far would 105,000 barrels of oil a day at full market value would go towards meeting Venezuela’s debt with China.

As readers of this blog well know, Venezuela is propping the Cuban Communist regime, 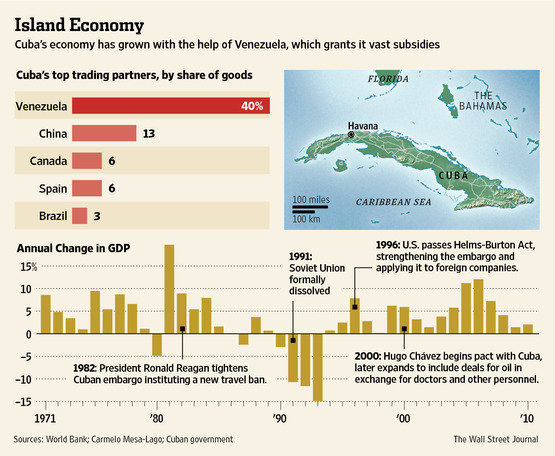 Raul Castro and his cronies aim to create in Venezuela “a politburo of sorts, a council that operates in consensus and will guarantee Chavismo’s stability as it unites likely heirs and rivals.”

By doing this, Raul is also perpetuating his iron grip on Cuba. Last June the Wall Street Journal pointed out,

Few analysts think a departure of Mr. Chávez would lead to political revolt in Havana that would threaten the Castros’ regime. But it might force Cuba to accelerate free-market reforms. The crisis of the 1990s forced Cuba to adopt limited free-market reforms to survive, including the first licenses for private restaurants. When times got better under Mr. Chávez, Fidel Castro rolled back the reforms.

“If Chávez were to kick the bucket, then the impetus toward reform would probably return because there wouldn’t be any other alternative,” said Arch Ritter, an economist specializing in Cuba at Carleton University in Ottawa.

Additionally, according to at least one analyst, Control of the Venezuelan government implies control of the largest natural gas reserves in Latin America and the largest deposit of oil in the world.

Venezuela’s neighbor, Brazil, is watching the action, and Dilma Rousseff has appealed for Venezuelans to follow their constitution. As you may recall, Venezuela joined Mercosur at a summit headed by Rousseff but has yet to adopt its tariffs and rules.

For now, my friend M. put it well, “the Castros have taken control [of Venezuela] without firing a shot!”

What about Chavez’s health, you ask? I don’t expect anything other than rumors and leaks until January 10. Venezuelan blogger Daniel expects Epiphany on January 5 (tomorrow).

RELATED,
Chavez Will Leave Behind An Economic Crisis of Historic Proportions