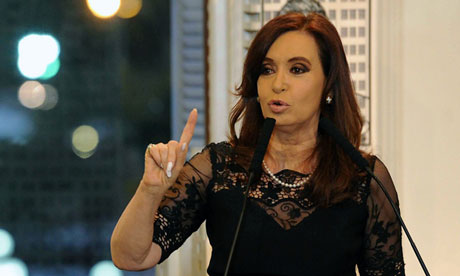 Cristina Fernandez took out an ad in the UK’s Guardian and the Independent basically telling UK Prime Minister David Cameron to have the UK “return” the Falklands to Argentina.

Argentina’s been out of the Falklands for 181 years and got their butts kicked when they tried to invade 31 years ago, but Cristina needs a distraction from her ruinous domestic policies, and oil was found off the Falklands, hence, the ad.

Mr Cameron’s spokesman said the people of the Falklands had shown “a clear desire to remain British” and the Argentine government should respect their right to self determination.

Ed Morrissey posts on the story:

Argentina now argues that the British planted people on the island over the last 180 years of sovereignty, and that the people currently living on the islands — which are more than 250 miles away from Argentina, by the way — should be ineligible for self-determination. It’s a cute argument, as it does away with the question of self-determination at all — but by the same measure, most Argentinians would be ineligible for self-determination, as their population came mainly from colonial expansion from a couple of centuries before. What’s the cutoff? 181 years? 241 years? 369 years?

No one can be expected to take this seriously, but Cameron is clearly taking no chances.

Cristina ought to be worrying her little Botoxed head over her domestic policies… and maybe, just maybe, over her political future if the time comes when Hugo Chavez’s demise stops those suitcases full of money that finance her campaigns.

Jeff Dunetz finds a metaphor buried inside all the rubble.