China’s been buying raw materials big-time in Latin America. Brazilian company Vale made a deal for Chinese-built ships, and, bam! now the world’s biggest iron ore ship is not allowed to dock in China: 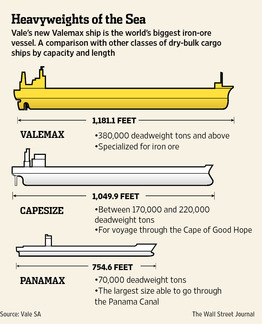 Last December the first vessel, the Valemax Berge Everest, docked in the northeastern Chinese port of Dalian, where it discharged 350,000 tons of iron ore in 55 hours—a world record. The head of China’s steel industry association said the ships would help lower costs.

But a month later China’s Transport Ministry, citing concerns about Chinese ports ability to handle such ships safely, issued a circular that effectively banned them. The Chinese Shipowners’ Association had denounced the Valemax ships as “a matter of monopoly and unfair competition, which not only harms the shipping interest of mainland China, but also that of South Korea, Japan and Taiwan area.” The association declined to comment for this article. The Transport Ministry didn’t respond to requests for comment.

The appearance of a 60-centimeter crack on the hull of a Valemax ship in Brazil last December bolstered the ministry’s concern. But engineers specializing in ship safety said the incident was isolated and insufficient to cast serious doubt on the safety of Valemax ships. Valemax vessels have docked at ports in such places as Japan, Italy, the Netherlands and the Philippines.

The chairman of the shipowners’ association is Wei Jiafu, who also is chairman of state-controlled shipping line China Ocean Shipping (Group) Co., the country’s largest shipping line by capacity. Captain Wei, as he is often called, is a rare colorful executive in China’s staid business sphere and once was captured by pirates. The Cosco chairman also is a senior member of the Communist Party and a member of the powerful CPC Central Committee for Discipline Inspection, an internal discipline watchdog.

Mr. Wei has been critical of shipping-industry overcapacity and at a September conference decried “vicious competition” from new entrants into the sector. The company’s China Cosco unit posted a 10.5 billion yuan ($1.69 billion) loss last year, hobbled by a sector glut, slowing global trade and the company’s own shipbuilding binge. The unit, which is publicly traded, is on track to declare a sizable loss this year.

Industry watchers said Cosco’s opposition represented the biggest barrier to Valemaxes docking in China. “Cosco had the most to lose from Vale’s plan,” said Macquarie Securities analyst Janet Lewis, who described Mr. Wei as the “most vocal” proponent of banning Valemax ships.

Vale’s representatives are waiting to meet with the Transport Ministry; Dilma Rousseff pressed for a joint task force with China’s top economic planning agency, the National Development and Reform Commission; China’s leadership is in transition.

The only thing you can count on is that nothing’s going to happen until the powers-that-be in China’s new leadership get to profit from all of this.

In case you are under the impression that China has a capitalist economy, here’s the dictionary definition of mercantilism.