So much for having a tango Thanksgiving weekend in Buenos Aires, 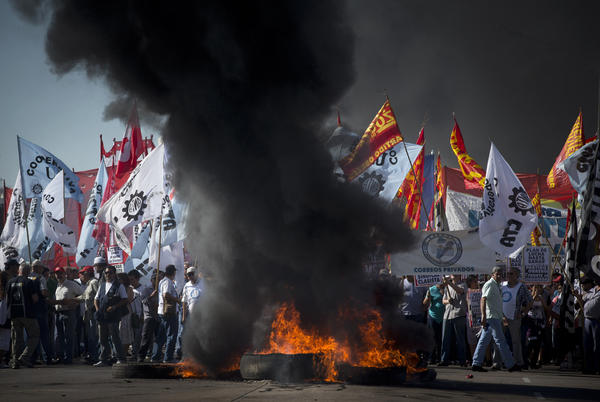 Strikes called by two Argentine unions pressing for reduced taxes and better social benefits paralyzed Buenos Aires and much of the country, the latest signs of an upswell in opposition to President Cristina Fernandez and her policies.

An estimated 2,000 trucks blocked bridges and arterial roads in Buenos Aires as well as those leading to provincial capitals, bringing commerce to a halt. Hugo Moyano, head of the Truckers Union, was a strong supporter of Fernandez in her reelection campaign last year but has since turned into one of her fiercest critics.

Buenos Aires’ main commuter airport was shut down by the work stoppage, stranding many provincial tourists and business travelers in the capital. All but one of the capital’s rail lines were closed, and many commuters simply stayed home from work.

The protesters want more government-provided money and benefits; the thing is, Cristina’s ran out of other people’s money. Still, she plans to run for a third term.

UPDATE,
Linked by MOTUS. Thank you!