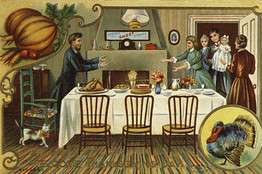 The WSJ:
Thanksgiving, 1789
George Washington’s proclamation was not without controversy.

It was his first presidential proclamation, and it was well heeded. According to the “Papers of George Washington,” compiled by the University of Virginia, Thanksgiving Day was “widely celebrated throughout the nation.” Newspapers around the country published the proclamation and announced plans for public functions in honor of the day. Religious services were held, and churches solicited donations for the poor. Washington himself sent $25 to a pastor in New York City, requesting that the funds be “applied towards relieving the poor of the Presbyterian Churches,” in the words of his secretary.

Thanksgiving feasts in New England at the time of the nation’s founding were similar to those today, says Charles Lyle, director of the Webb-Deane-Stevens Museum in Wethersfield, Conn. The museum recently hosted an 18th-century-style Thanksgiving dinner using recipes supplied by a local food historian, Paul Courchaine. Turkey and pumpkin pie were on the menu, along with venison pie, roast goose, roast pork, butternut squash, creamed onions, pottage of cabbage, onions and leeks, and Indian pudding, made from cornmeal and spices.

In a bow to contemporary tastes, several wines were served at the museum but not the one Americans were likely to have drunk in the 18th century—Madeira, a high-alcohol-content wine fortified with brandy. Before the Revolution, Madeira, which came from the Portuguese-owned Madeira Islands, was considered a patriotic beverage, since it was not subject to British taxation. It was Washington’s favorite drink.

Washington was keenly aware of his role as a model for future presidents. He once remarked that “There is scarcely any part of my conduct which may not be hereafter drawn into precedent.” That included his Thanksgiving Proclamation of 1789, which set the standard for Thanksgiving Proclamations by future presidents, a list that included James Madison, Abraham Lincoln, and then every president up to the present day.