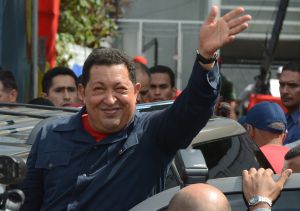 Hugo Chávez – surprising no one – won re-election, and now the international media are wondering for how long will he live:

Brazil’s O Globo (link in Portuguese) does the same.

Looking at the bloated 58 year old president, they have good reason to ask, particularly when compared with the fit 40 year old Capriles.

Capriles, in his press conference immediately after the results were announced, said,

God’s timing is perfect, and God’s time will arrive.

Until then, it’s more Hugo. Tanks on the streets and all.


————————————–
Speaking of timing, a Che impersonator was celebrating Hugo’s victory; Forty five years ago this week, Ernesto “Che” Guevara got a major dose of his own medicine.