No doubt Fidel Castro will die, and keeping track of the rumors has become a pastime not only for all Cubans but also for all Latin America watchers – including the ones, like myself, who bring up the Zombie Fidel. And Cubans are restless.

Mary O’Grady writes, The Castros in Winter
Cuba will soon make it easier for some to legally travel abroad. This is not a sign of liberalization.

This at first sounds like progress. But it doesn’t come close to setting Cubans free to roam the world. Citizens will still be required to secure a passport validation stamp, and for many Cubans the costs will add up to more than the fee for the white card. The stamp can also be withheld at the discretion of the regime.

As spelled out in the law, scientists, doctors and anyone deemed to be of high value to the state will have a hard time getting permission to travel—and even if they get it, they will have to wait five years between filing an application and actually boarding a plane. An editorial in the Cuban state newspaper last week said that the regime intends to protect itself from “the theft of talent applied by the powerful,” i.e., the U.S. The law also stipulates a catchall rejection category marked “defense and national security interests.” Translation: Nobody gets out without the dictator’s blessing.

Meanwhile, you can’t make this up: Hotel official: Fidel Castro appears in public

HAVANA — Fidel Castro has appeared in public for the first time in months, a top hotel executive told The Associated Press on Sunday, challenging persistent rumors that the aging revolutionary is near death.

The 86-year-old leader dropped off a Venezuelan guest at the Hotel Nacional on Saturday afternoon, then stayed for about half an hour to chat with hotel staff, commercial director Yamila Fuster said.

The “guest” is supposedly former Venezuelan vice-president Elías Jaua, who showed (but didn’t release) to the media a snapshot (h/t Miguel) of the blessed event:

Colombia, Argentina Trade Barbs on Economic Might
Colombia is bragging that its economy has surpassed Argentina to become is the third-largest in Latin America, marking a turnaround for a country that until a few years ago had its reputation mauled by violence.

CHILE
Chile will request the United States extradite an ex-military commander over the killings of two U.S. reporters

Colombia Peace Talks Have Bumpy Kickoff
Colombia’s main guerrilla army used the opening salvo of peace talks to attack some of the country’s most prominent oil and mining firms, suggesting the Marxist group will try to use the meetings to assail Colombia’s market-friendly economic policies.

CUBA
All will be revealed…

The very, very slow thaw of the half-century U.S.-Cuba standoff

Cuban Regime Will Open it Doors, To Its Own People

In the short-term, the Party is trying playing the immigration card a few weeks before the U.S. presidential election. Why? In part, because it can. They think they can influence votes in South Florida’s large Cuban-American community by using the immigration/family reunification talisman to divide voters in Miami. I can think of at least one Congressional race where this could become an minor issue, but it is mostly quixotic.

Feds: Remittance firm at center of Medicare-Cuba laundering scam
Federal prosecutors named Caribbean Transfers as the financial backer that sent millions of dollars to Cuba as part of a Medicare-fraud scheme.

The revelation surfaced in the widening case of a now-convicted check-cashing store owner who was first believed to be at the center of the federal case. It marked the first time that investigators traced tainted Medicare proceeds to Cuba’s state-controlled bank. 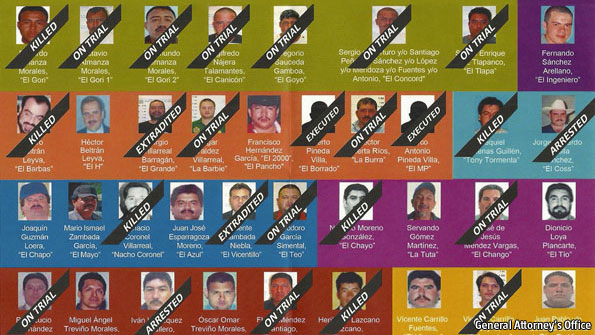 Mexico goes to the opera, and likes what it hears

PANAMA
Protests in Panama duty-free zone
Demonstrators in Panama clash with police after a new law is approved allowing the sale of state-owned land in the free trade zone of Colon.

PERU
Fujimori wants a pardon: Pardon me
A request for clemency puts the president in a bind

VENEZUELA
What Chávez inherits from Chávez

If only we could be as efficient as the soviets…

Now what? The society we have

How The Venezuelan Presidential Vote Was Won

Cuba: If it’s October, the rumors must be flying

Cuba: Fidel and the Nazis