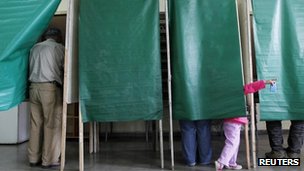 Chile’s local elections, yesterday, had a 40% turnout,
Chile local polls see low turnout with voting voluntary
Chilean President Sebastian Pinera says the decision by many Chileans not to vote in Sunday’s local elections is a “warning sign” that should be heeded.

The polls, the first to be held since voting was made voluntary, were marked by an abstention of 60%.

The elections are seen as an early indicator with just over a year to go before the November 2013 presidential race.

Carolina Toha, who worked as spokeswoman for former president Michelle Bachelet, was elected mayor of the capital, defeating the current incumbent Pablo Zalaquett.

However, centre-right candidates held onto several big cities, including Valparaiso.

Results suggest centre-left parties took about 43% of the vote, compared with 38% for parties allied to Mr Pinera.

Among the winners was Salvador Allende’s granddaughter, Maya Fernández Allende,

Fernandez, 41, defeated incumbent Mayor Pedro Sabat of the center-right National Renovation party in Nunoa, a district of the capital. A socialist and veterinarian by trade, she served on the local council in the district after growing up in Cuba, where her mother Beatriz lived in exile after President Allende died during Gen. Augusto Pinochet’s 1973 coup.

The left’s biggest victory was in central Santiago, where Carolina Toha defeated Pablo Zalaquett of the ultra-conservative Independent Democratic Union. Toha served as former President Michelle Bachelet’s spokeswoman, and her father, Allende’s vice president, died after being jailed and tortured.

The low turnout was apparently unaffected by the new rule giving the vote to foreigners living in Chile for at least five years.

Some of my sources in the country believe that the particularly nasty campaign may have turned off citizens from participating; many of the right-leaning mayors were targets of mud-slinging, obnoxious claims by the left. Student demonstrations, while stirring the left, may have demotivated others now that voting is not compulsory.

Does this mean the democratic process has been undermined? We shall find out by next year’s presidential election.

For now, Sebastián Piñera’s odds of re-election are not looking very good.