Contrasting Mitt’s confident and relaxed replies last night, today Obama was wordy and hesitant. Drudge has the headlines (and points out this was Obama’s “first serious interview” in…how long now?)

Obama still blames video for Libya attack?
Ramos Rips Away...
'YOU DID NOT KEEP YOUR PROMISE'...
Shouldn't you 'fire' Eric Holder?
Student asks president for advice -- on how to find a job! 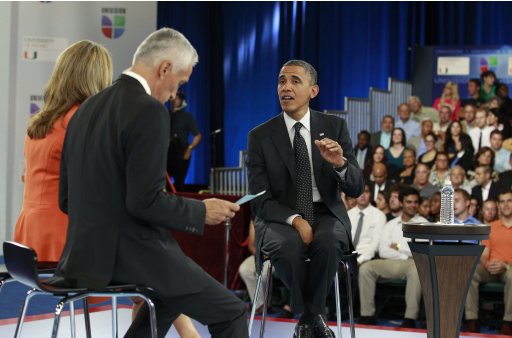 His answer when asked “what is your biggest failure” started with pandering and ended with Obamamalaise,

1) Given how he so often says he wakes up every morning thinking about what he could do to create jobs, it’s interesting that he says his inability to pass comprehensive immigration reform (even when he totally controlled Congress) was his biggest failure. But I suppose that can be written off as simple pandering.

Which, incidentally, didn’t work, since Ramos did not let him off the hook later in the interview,

It took no time for Romney to fire back,

You told me during an interview that you and Mr. Holder did not authorize the Fast and Furious operation that allowed 2,000 weapons from the United States into Mexico and they were in the drug trafficking [cartels’] hands,” Univision co-host Jorge Ramos asked Obama, according to a translator, during the interview. “I think that up to 100 Mexicans might have died and also American agent Brian Terry. There’s a report that 14 agents were responsible for the operation but shouldn’t the attorney general, Eric Holder, he should have known about that and if he didn’t, should you fire him?”

Obama responded with similar talking points his administration has used time and again.

“Well, first of all, I think it’s important to understand that the Fast and Furious program was a field-initiated program, begun under the previous administration,” Obama said. “When Eric Holder found out about it, he discontinued it. We assigned an inspector general to do a thorough report that was just issued — confirming that in fact Eric Holder did not know about this, that he took prompt action and that the people who did initiate this were held accountable. But, what I think is most important is recognizing that we’ve got a challenge in terms of weapons flowing south, and the strategy that was pursued out of Arizona, obviously, was completely wrongheaded. Those folks who were responsible have been held accountable. The question now is, how do we move forward with a strategy that will actually work?”

“We are going to have to work with Mexican law enforcement to accomplish this, but I will tell you that Eric Holder has my complete confidence, because he has shown himself to be willing to hold accountable those who took these actions and is passionate about making sure that we’re preventing guns from getting into the wrong hands,” Obama continued.

Ramos followed up in English: “But if you have nothing to hide, then why are you not releasing papers to the –”

Obama responded: “The truth is we’ve released thousands of papers.

“But not all of them,” Ramos countered. (RELATED: Inspector general: Obama administration obstructed Fast and Furious investigation)

“We’ve released almost all of them,” Obama said. “The ones that we don’t release, typically, relate to internal communications that were not related to the actual Fast and Furious operation. The challenge that we have is that, at any given moment in the federal government, there may be people who do dumb things, and I’ve seen it, I promise. Ultimately, I’m responsible and my key managers, including the attorney general, are responsible for holding those people accountable, for making sure that they are fired if they do dumb things and then fixing the system to ensure that it doesn’t happen again, and I’m very confident that you will not see any kinds of actions like this in the future, but what I don’t like to see is these kinds of issues becoming political circuses or ways to score political points in Congress partly because it becomes a distraction from us doing the business that we need to do for the American people.”

When pressed on for an independent investigation,

Obama answered: “Well, understand that, not only have we had multiple hearings in Congress, but the inspector general is put in place specifically to be independent from the attorney general. This attorney general’s [sic] report was not a whitewash in any way. I mean, it was tough on the Justice Department, and it indicated that, potentially, more supervision was needed, people should have known in some cases, even if they didn’t actually know. So, it was, I think, independent, honest, it was a clear assessment of what had gone wrong in that situation.”

“And we are happy to continue to provide the information that is relevant to this, but one of the things that happens in Washington is, very quickly, these issues become political distractions as opposed to us actually solving the problems that we need to solve,” Obama continued. “And, this issue of guns flowing south is a hard issue to solve, because this country respects the Second Amendment, we want to protect the rights of gun owners and those who are seeking to purchase firearms, but oftentimes that’s exploited as well. And so we’ve got to make sure we’re properly balancing the rights of U.S. citizens but making sure that we’re also interdicting those arms that would get into the hands of criminals.”

Video below the fold, since it starts right away,

Notice the body language: hand on his hip, defensively, looking down,

A final comment on these two forums by Univision: Ramos and Salinas did an excellent job of asking tough questions and did not coddle either candidate, unlike the English-language American media, which worships Obama.

UPDATE:
Linked by The Other McCain. Thank you!