The Obama administration clearly hoped that the Department of Justice’s Inspector General report on Operation Fast and Furious would be the last word on the scandal. which has been tied to hundreds of deaths in Mexico and the murders of two American law-enforcement officials. However, a new report from Univision to be broadcast tomorrow, previewed here by ABC News, may put the issue back on the front pages. One source called Univision’s findings the “holy grail” that Congressional investigators have been seeking.
…
Additional guns, previously unreported by congressional investigators, found their way into the hands of drug traffickers across Latin America in countries such as, Honduras and Colombia, as well as the U.S. Commonwealth of Puerto Rico. A person familiar with the recent congressional hearings called Univision’s findings “the holy grail” that Congress had been searching for.

Putin Sends Russian Puppy to Venezuelan President. The Russian terrier is known as “Stalin’s dog”, which will certainly do Hugo proud.

Over at Drudge, Hugo has little to celebrate, 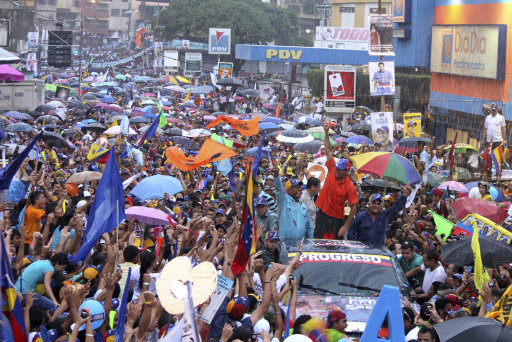 Venezuela’s marathon man looks to run down Chavez
Henrique Capriles, an opposition leader who runs marathons in his spare time, hopes to give Hugo Chavez a close race in elections next weekend, reports Philip Sherwell

The election is scheduled for next Sunday.

The Audacity of Corruption (h/t Babalu)

I want to talk about this Libyan thing, because we crossed some lines here. It’s not about politics. First of all we’ve had nine day of lies over what happened because they can’t dare say it’s a terrorist attack, and the press won’t push this. Yesterday there was not a single piece in The New York Times over the question of Libya. Twenty American embassies, yesterday, were under attack. None of that is on the national news. None of it is being pressed in the papers. If a President of either party—I don’t care whether it was Jimmy Carter or Bill Clinton or George Bush or Ronald Reagan or George H. W. Bush—had a terrorist incident, and got on an airplane after saying something, and flown off to a fundraiser in Las Vegas, they would have been crucified! It would have been—it should have been the equivalent, for Barack Obama, of George Bush’s “flying over Katrina” moment. But nothing was said at all, and nothing will be said.

It is one thing to bias the news, or have a biased view. It is another thing to specifically decide that you will not tell the American people information they have a right to know, and I choose right now, openly, and this is—if I had more time I’d do all the names for it—but The New York Times, The Washington Post, or the most important papers that influence the networks, ABC, NBC, and, to a lesser extent—because CBS has actually been on this story, partly because the President of Libya appeared on [Bob Schieffer’s Face the Nation] and said, on Sunday, while [U.S. Ambassador to the U.N.] Susan Rice was out—the U.N. Ambassador has no portfolio on this matter—lying, said of the Secretary—you know why, notice the Secretary of State wasn’t out there doing this—was on national television, lying and promoting the White House line while the Libyan President, the very same moment, is saying “This is a premeditated attack.” Nobody has asked that question. This morning—take a look at The New York Times this morning, it’s a minor reference. Oh, now we’ve decided that it was a terrorist incident. But this is—that would have changed, that should change the politics.

This is not without accomplices, because the incompetence of the [Mitt] Romney campaign, which I said a week ago is the—my God!—the worst campaign in my lifetime, and the Republican establishment in general’s inability to fight, has allowed these things to happen in part because they don’t do it. But I want to go through two other quick points.

[Mohamed] Morsi and Egypt: The President of Egypt, we find out now, that his whole agenda has been getting the “Blind Sheikh” [Omar Abdel-Rahman], who’s responsible for the bombings of the World Trade Center in 1993, out of jail. Prison. I’ve been told specifically, by a member of the intelligence community that the White House and State Department are negotiating that now. They have now come out and denied it, but [Morsi] comes out, that they ordered—he’s the head of the Muslim Brotherhood! The American people know what they think of the Muslim Brotherhood: They are against them eleven to one, all right? And he’s the president of the Muslim Brotherhood, giving $2 billion to United States. He tells them—we had advance warning because they had said they were gonna do this, attack our embassy. The President—after the incident, after 48 hours, Mr. Morsi does nothing and says nothing—picks up the phone, calls him, and demands that they call it off. On Friday—last Friday, a week ago today—there was supposed to be a big demonstration. We thought that would be the big day—no, it disappeared, because Morsi called it off. But no press person has investigated this, just as no press person will go and ask the most obvious questions, when there are really good stories here, good media stories, and good news stories. They are in the tank and this is a frightening thing.

White House officials dispute that the press secretary, Jay Carney, cited the anti-Muhammad video as the cause of the attack in Benghazi. The Office of the Director of National Intelligence now says it, not the White House is responsible for the Obama administration’s initial claims that the deadly assault grew from a spontaneous protest against an anti-Islam video.

The unusual statement from the Office of the Director of National Intelligence appeared to have two goals: updating the public on the latest findings of the investigation into the assault, and shielding the White House from a political backlash over its original accounts.

“It’s A Mystery Why Romney Can’t Seize The Moment On This” (h/t Hot Air).

Related,
Kirsten Powers: The media may be complicit in another terrorist attack on America

Linked by Pirate’s Cove. Thank you!

The Peak Time for Everything
Pack More in a Day By Matching Tasks To the Body’s Energy; Lung Power at 5 p.m.

with handy-dandy video and graphic

END_OF_DOCUMENT_TOKEN_TO_BE_REPLACED

“Romney’s such a nut to claim a large swathe of America has an entitlement mentality and thinks the government exists to give them free stuff.”

Back in FDR days, people had to settle for a party line, and even he didn’t give them that.

UPDATE,
Where do “Obama phones” come from? They come from your user fees!

SÃO PAULO, Brazil—The country’s Federal Police detained the head of Google Inc.’s Brazilian operations after the company failed to act on an electoral judge’s order to remove videos from its YouTube site criticizing a candidate in a rural state election.

Separately, a Brazilian judge ordered Google to remove versions of the “Innocence of the Muslims” video that has sparked deadly riots across the Middle East from Brazilian YouTube within 10 days or face fines. The ruling was in response to a suit brought by a group called the National Union of Islamic Entities, according to court documents.

Apparently no one will be sent to prison, but Google will be fined $4,926/day if Google doesn’t remove the “Innocence of the Muslims” video.

A friend had a relative who owned a pharmacy in the former West Berlin that hit a bonanza selling consumer goods (“Shampoo. Soap. Vitamins. Tylenol.” Plus toilet paper, Kleenex, and tampons) when the wall came down.

Bargain-hunting members of the huge visiting delegation eagerly visited a Costco, a Payless shoe store, a Walgreens and a Duane Reade in recent days while hunting for discount products in short supply back home:
Shampoo. Soap. Vitamins. Tylenol.
…
The trip to a Harlem Costco secured an assortment of wholesale shampoos, while a drugstore visit brought more than a dozen bottles of vitamins and Tylenol.

Good thing he didn’t try to stock up on Benadryl or he may have been busted. But moving right along, Mahmoud continues to imitate his fictional counterpart,

While the Iranians scrambled for the staples of most Western bathrooms, their Holocaust-denying boss remained comfortably ensconced in midtown’s posh Warwick Hotel.”
Three personal chefs were at Ahmadinejad’s beck and call, and the Iranians booked two full floors in the luxury hotel, where suites can go for $1,600 a night, according to a hotel employee.
The cooks brought in their own food, and the president’s men dined on the second floor.

As I write this post, Netanyahu is asking to “draw a clear red line” as the only peaceful way left to prevent Iran from having nuclear weapons.

Let’s hope the world does.

UPDATE,
In the Shadow of Ahmadinejad’s Hotel, via Instapundit.

The Lid has the full speech,

Last week it was baking bread; this week is cleaning the house.

Face it, guys, no amount of blog reading is going to make your living environment inhabitable, clean your clothes, or cook your food. For that, you’ve got to either learn how to, or pay someone else. So, until you win the lotto, here are two books I recommend:

The first one, Home-Ec 101: Skills for Everyday Living – Cook it, Clean it, Fix it, Wash it, is a good, basic book based on the Home Ec 101 website. It’s a very good choice for someone setting up household for the first time.

The second one, Home Comforts: The Art and Science of Keeping House, is nearly-encyclopedic in detail and variety of topics covered. With seventy-two chapters, plus notes, sources, and indexing, author Cheryl Mendleson leaves no domestic stone unturned. You will refer to this book many times during your life because of the plethora of information on subjects from vegetables to insurance. And, once you’re able to hire your own butler, you’ll want to read the chapter on domestic employment laws, too.

Also popular, but pricier: Martha Stewart’s Homekeeping Handbook: The Essential Guide to Caring for Everything in Your Home