Latin America Gears Up as Bike Hub. I’ve been to Buenos Aires, and I wouldn’t try it. Plus, if Buenos Aires is so intent on “improving quality of life”, they could start by repairing the sidewalks. 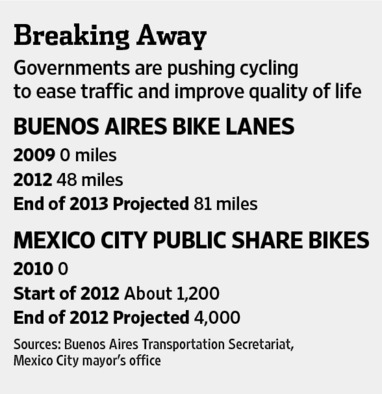 From Poverty to Power
How Good Governance Made Brazil a Model Nation. I wouldn’t call it a model nation yet.

The China Temptation
Why Brazil should reject Beijing’s economic model.

Car bombs cause major blackout in southwest Colombia, via Gates of Vienna.

GUATEMALA
Ancient Mayans May Have Sacrificed Earliest Domestic Turkeys, via Gates of Vienna.

JAMAICA
Jamaica at 50: A Caribbean island that has far more to offer than Bob Marley and Usain Bolt…

Mexico rises from the drug ravages

PERU
High flying technology to map Peru ruins
Archaeologists in Peru are getting ready to fly an unmanned craft that could radically speed up data gathering at historical sites.

He May Be Leader of Peru, but to Outspoken Kin, He’s Just a Disappointment, via ¡No Pasarán!

Venezuela’s army
The vote that counts
Would the generals accept a presidential handover?

The week’s posts:
Crony capitalism: in Argentina, it’s a way of life

Quote of the day

In The Green Room:
Chavez: American “mercenary” detained in Venezuela