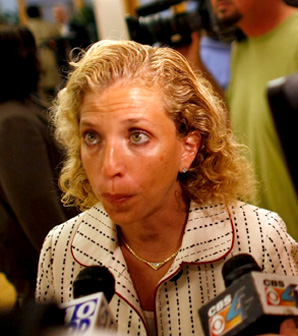 Not for the first time, either:

This was also the case in Miami about two months ago at non-profit event SaveDade, where both Wasserman Schultz and Senator Bill Nelson spoke. The event hosts welcomed me with open arms, and stated that they were big fans of the website.

Just as Wasserman Schultz was about to speak, the same handler tried to do the same thing and boot me from the event. But the organizers of the event did not grant the request, because it was their event, not Wasserman Schultz’. She then warned Senator Bill Nelson’s entourage who quickly escorted him out the back door of the event, avoiding the front door he originally entered through.

All Javier did was to show up with media credentials.

And then people wonder why I refer to the Democrat party…