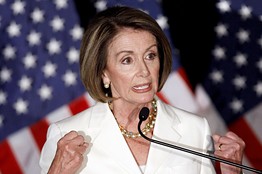 Nancy’s so optimistic she doesn’t want Democrats to attend the convention; instead, she wants them out on the field:

“I’m not encouraging anyone to go to the convention, having nothing to do with anything except I think they should stay home, campaign in their districts, use their financial and political resources to help them win their election,” Pelosi said in an exclusive interview for POLITICO Live’s On Congress, a new weekly show to be streamed live on POLITICO’s website and broadcast on NewsChannel 8 on Wednesdays.

“We nominated a president last time. We have an incumbent President of the United States. We’re very proud of him. There certainly will be enough people there to express that pride, but I’m not encouraging members to go to the convention no matter what the situation was, because they can be home. It’s campaign time. It’s the first week in September,” she said.

In addition, Pelosi also wouldn’t commit to serving in the leadership of the 113th Congress.
“I wouldn’t assume anything,” she told POLITICO editor in chief John Harris and reporter Lois Romano. “I would just assume that Democrats would win and we would stop the obstruction of the President’s agenda. I think it’s fair to say that most people don’t have the faintest idea about leadership races in the Congress.”

Does that mean she’s worried that the Senate will be in play? Are the internals that bad?

Will she help out Wiener Weiner on his comeback?

Or is she going to focus her attention on her outsourced investments?

And,
will she go to the Convention, or is she going to “stay home, campaign in her district, use her financial and political resources to help them win their election” instead?