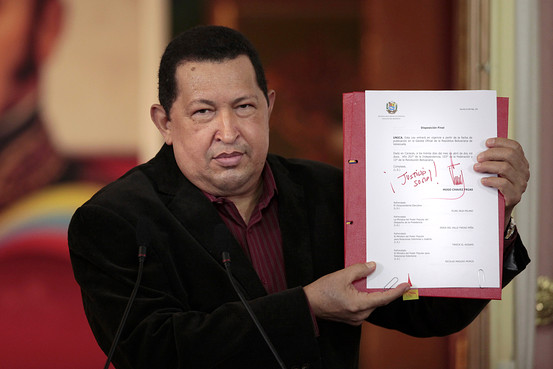 Hugo Chávez went briefly to Venezuela and flew back to Cuba, but before he left,

he announced Monday steps to withdraw Venezuela from the hemisphere’s most respected human rights panel and signed a potentially major overhaul of the country’s labor law.

Chavez has long been at odds with the Inter-American Commission on Human Rights, or IACHR, which he has often labeled a puppet of the U.S., the ideological foe of Venezuela’s leftist government. The commission, an independent adjunct of the Organization of American States, has in turn issued forceful rebukes of Chavez’s human rights record during his 13 years in power.

Among them, the watchdog organization produced a report of over 300 pages in 2010 detailing Venezuela’s shortcomings in “political rights and participation in public life,” “independence and separation of public powers,” and “freedom of thought and expression,” among other areas. The Chavez government protested the findings.

“It’s been some time since we should have retired from that commission,” Mr. Chavez said Monday during a televised address from the presidential palace. Chavez ordered government authorities to study Venezuela’s membership in the IACHR and said he expected a recommendation quickly.

He left little doubt, however, that he favored an exit.

Venezuela News and Views calls it “one of the most telling moments of his presidency in recent months.”

This time he actually showed up in public, to sign a new labor law (details at the link) which will increase the cost of hiring people in Venezuela. The details of the law are not known.

While he was at it, he waved a Crucifix while asserting that Christ will “continue to work a miracle” and cure him while he’s in Cuba, and promised to return “in a few days”. You can watch the video (in Spanish),

After he left, he tweetted his followers, who staged a huge May Day rally in Caracas.

UPDATE, May 2, 2012,
Here’s the YouTube of Chavez requesting that the new Council of State approve Venezuela’s withdrawal from the IACHR (in Spanish),