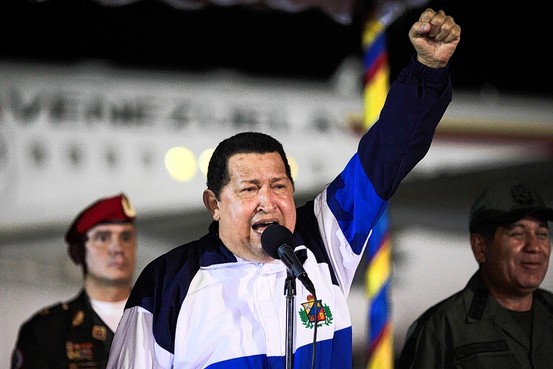 Debt Falls as Chávez Fails to Back Down

Signs that President Hugo Chávez has no intentions of backing down from Venezuela’s upcoming presidential elections, despite his battle with cancer, are putting a damper on the country’s red-hot sovereign debt.

It puts a damper for speculators-on-a-death watch

Investors and analysts have turned bearish on bonds issued by the Venezuelan government and Petroleos de Venezuela, the state oil company, in recent days, suggesting the market may have overestimated the chances of Mr. Chávez’s leftist regime being ousted in the October vote.

After a stellar run over the last several months, many Venezuelan bonds have cratered from highs hit at the beginning of May, as hopes wane for Mr. Chávez, 57, exiting the stage and opening a path for more conventional economic policies.

That ain’t gonna happen for a while. Meanwhile, New Pdvsa Bond Sold Directly To State Banks

The bond will not be sold to individuals or companies, it will all be sold to State banks, largely to the Central Bank in order to supply the bank’s foreign exchange system SITME. While many people are dissapointed that they will not be included, it makes sense, the operational hassle of thousands of people applying to get only $1,000 at the preferential rate of Bs. 4.3 per dollars simply does not make sense.

Neither does the Bolivarian revolution.