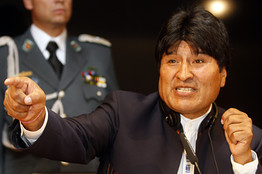 Evo Morales has to keep two sets of people happy: the coca growers, and the Chinese. That means that he’ll stomp all over the indigenous peoples of Bolivia, including his own. Now there’s a backlash.

Evo Morales’s Victims Push Back
As protests against him rise and his popularity falls, the Bolivian president nationalizes another big company.

The international left has explained Mr. Morales’s early popularity in racial terms, painting him and his white upper-class Marxist Vice President Alvaro Garcia Linera as noble liberators of an indigenous nation. This ignores the fact that a majority of Bolivians are culturally mestizo, meaning that regardless of their bloodlines they no longer live like their ancestors did 500 years ago and they speak Spanish. What the socialists also miss is that indigenous Bolivians are no more interested in being tyrannized by someone who looks like them than by someone who doesn’t.

Things ought to be going well for Mr. Morales. Bolivia is a resource supplier, and commodity prices on the whole are booming. Yet the economy has performed only so-so. Gross domestic product averaged an anemic 2.9% annual growth from 2005 through 2010. Last year it expanded at an estimated 5% but still missed the 6% target that economists say developing countries must maintain over a decade to make an impact on poverty rates.

One reason is the dearth of private investment. Total investment is running around 16% of GDP when something closer to 25% is needed to generate strong, long-term growth. Worse, most of that investment comes from the public sector and is increasingly financed by the central bank. Private investment has been running at only 6% to 7% of GDP, suggesting that investors are worried about country risk.

His gas industry venture isn’t working out well either. After the 2006 gas nationalization, he backtracked on a long-term contract to supply Brazil through a Petrobras pipeline and tried to raise the price. Petrobras responded by increasing its capacity to handle imported liquefied natural gas and began to invest heavily to exploit domestic Brazilian resources. It is no longer reliant on Bolivian gas.

Meanwhile, Mr. Morales’s real problem, Bolivian hatred of his authoritarianism, is spinning out of control. The trouble started with a December 2010 effort to raise gasoline prices by 70%. The uprising—known as the gasolinazo—was so violent that he was forced to back down. The incident badly damaged his image.

Next he announced plans to put a Brazilian-financed highway through an Indian reserve in the Bolivian Amazon known by its Spanish initials as the Tipnis. Inhabitants asked for a rerouting to spare their ancestral lands. When Mr. Morales refused, hundreds of Indians took off on a 500-kilometer protest march to La Paz. Along the way they encountered a pro-Morales roadblock and were tear-gassed by police. When the government rounded up some 300 marchers and tried to fly them out of the area, local townspeople set fires on the airport runway in solidarity with the captives.

Mr. Morales has suspended construction on the highway but is still insisting that the road be built because the coca growers—his most important constituency—need it to expand their businesses.

And, yes, Spanish corporations ought to take the hint that investing in countries led by Marxists is not wise.

UPDATE:
Linked by Extrano’s Alley. Thanks!