A second Monday in a row of shining “smart diplomacy”! 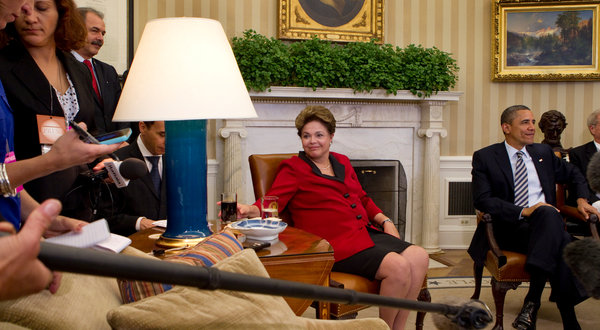 Well, at least Obama didn’t talk about Obamacare, but the meeting was described as “cordial enough,” which definitely is not a good sign,

This disconnect was revealed in one account after another in the news media here about the visit, in which commentators lamented the fact that Ms. Rousseff was not received with the pomp of a White House state dinner, recognition granted by the Obama administration to the leaders of South Korea, India and Britain.

“The bilateral reality is far from being a disgrace, despite the points in dispute, but there’s a considerable lack of mutual respect,” Caio Blinder, a columnist for the magazine Veja, said in an essay describing the “downgrade” of Ms. Rousseff’s visit.

This was Dilma’s first presidential visit to the USA and she was not amused, and, at the press conference following the two-hour meeting,

the leaders’ eyes rarely met, and Ms. Rousseff rarely looked at Mr. Obama as he spoke. He looked intently at her during her remarks, nodding in agreement at times. But he seemed to bristle when she expressed concern that America’s “monetary expansion policy” could impair growth in emerging economies like Brazil’s. Monetary policy is the responsibility of the Federal Reserve; the White House and Congress deal with fiscal policy.

No breakthroughs were revealed regarding Brazil’s policies in the Middle East, which seem to have undergone some fine-tuning under Ms. Rousseff from those of her predecessor, Luiz Inácio Lula da Silva, who in 2010 tried to forge an ambitious uranium exchange deal with Iran.

Dilma has made it known that she doesn’t like Iran’s death by stoning policy. However, she has not cut ties with Iran, is insisting that Cuba be invited to the Summit of the Americas, and is asking that the USA modify its monetary policy to put Brazil in a more advantageous position.

No wonder the two countries disagree,

As you may recall, three years ago Lula visited the White House and ate Obama’s lunch.

No word as to whether Obama told Dilma that Brazil was our closest ally punching above its weight.

Dilma’s stopping in Boston today. She’ll be talking about Science Without Borders,

a program that aims to send about 100,000 Brazilians to study at foreign universities. As many as half are expected to study in the United States.

Let’s hope they don’t get counted as “Hispanics.”