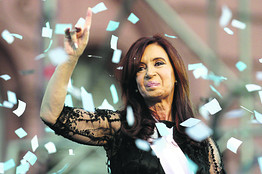 Argentina’s oil production has decreased by 12% between 2003 to 2010, and everybody’s having fits

Of course, Cristina’s talking of nationalizing YPF, since that worked so well for Aerolíneas Argentinas.

Which is yet another sample of Cristina’s approach to any issue, i.e., bring up nationalism. Oil, the Falklands, inflation, whatever, she has one solution.

Read what’s Behind the Battle for Argentina’s Oil.