Mary O’Grady writes,
Chile’s Cautionary Lesson for Americans
A free economy is at risk when a demand for equality is not answered by a defense of liberty.

Even while the material benefits of the market economy have been piling up for decades, Chile has been intellectually swamped by leftist ideas. The common principle: Economic inequality is immoral and the state has an obligation to correct it.

Rather than push back against this invitation to tyranny, the right too often cedes the moral high ground to its proponents. Mr. Piñera is among the culprits. His reactive half measures designed to satisfy the moderate elements of the equality brigades are undermining Chilean freedom. They are also undermining his power by making him look weak and incompetent.

Chileans aren’t interested in communism. That much was proved when Ms. Vallejo returned home from a trip to Cuba earlier this month to declare that Fidel Castro is a “great visionary” and his reflections are “light and hope” for Chile. She looked like a Castro stooge, and her popularity dipped. Things got worse when Cuban blogger Yoani Sánchez pointed out how ridiculous the Chilean “rebel” appeared in Cuba, following the orders of the military dictatorship.

Like a good student, Ms. Vallejo learned fast. Tapping into the middle-class sense of entitlement is a safer avenue for a rising demagogue. When 10,000 students poured into the streets of Santiago to renew their demand for free universities Wednesday, she was again on hand. “The people of Chile are here to continue defending the right of education,” she declared.

Kirchner Aide Pushed Her to Take Over Oil Firm

COLOMBIA
Colombia’s top diplomat demands apology from President Obama for Secret Service hooker scandal
“It is necessary, and I want to hear it from the White House,’ says Gabriel Silva

Prostitution in Colombia
Not the kind of press they were after

HAITI
The UN in Haiti
First, do no harm
Foreign peacekeepers have worn out their welcome. How can they be held accountable for their actions?

Young men in Mexico say the US no longer offers them a better future
Seismic shifts in immigration and demographics leave towns full of young men who once would have dreamed of the US, H/T Gates of Vienna.

LATIN AMERICA
Populists, centrists square off in South America’s leadership divide
Argentina, along with Venezuela Ecuador, Bolivia and Nicaragua, is part of a movement to centralize power in the executive, taking greater control of courts and the media. On the opposite end are Colombia, Chile, Mexico, Peru and Uruguay, which are led by centrist presidents using orthodox economic policies attuned to social needs

The week’s posts:
Obama got Osama but not much else
Venezuela: Chavez giveth, Chavez taketh away
Hugo Chavez and the singing judge
More Mexicans returning to Mx than coming to USA, UPDATED

At Real Clear World,
Bolivia: Venezuela Has Five Military Bases in the Country

But then, GWB never cancelled meetings or made the DL leave by the back door.

The above photo, into which some suspect the curiously shrunken President was photoshopped, was touted as depicting the moment(s) when Obama made “the gutsiest call in years,” namely killing bin-Laden. Joe Biden’s going around talking about that. The Obama campaign even came out with a video of Bill Clinton insinuating it was such a “gutsy call” that Mitt Romney wouldn’t have done it. Bill must be talking from experience, since Bill certainly didn’t,

Throughout the Nineties, bin Laden attacked US targets – military housing, ships, embassies – and Bill Clinton refused to respond. In 2000, after 17 sailors were killed on the USS Cole, Clinton’s Defense Secretary Bill Cohen said the attack “was not sufficiently provocative” to warrant a response.

The memo puts all control in the hands of Admiral McRaven – the “timing, operational decision making and control” are all up to McRaven. So the notion that Obama and his team were walking through every stage of the operation is incorrect. The hero here was McRaven, not Obama. And had the mission gone wrong, McRaven surely would have been thrown under the bus.

Le·gal In·sur·rec· tion looks at what happened after,

But the killing of one person has been against the backdrop of a complete disaster for the United States throughout the Middle East and Central Asia.

North Africa is or is on the way to domination by radical Islamists. We pushed Mubarak out without any transition, and the Muslim Brotherhood and even more extreme Islamists are nearing control. The same is true in Libya and Tunisia.

In Afghanistan, the Taliban are resurgent, waiting out Obama’s timeline for withdrawal. In Iraq, the Iranians have extended their influence and the nation again is dividing along sectarian lines, with the unifying factor (except among the Kurds) being hostility to the U.S.

In Syria, where for once we could have dealt a crushing blow to Iranian influence, we have helped Bashar Assad hang onto power to the extent that both sides hate us.

Our one true ally in the region, Israel, is in its most precarious position in decades, surrounded by massive Iranian-backed missile bases in Gaza, Lebanon and Syria.

There is almost nowhere in the Middle East that the United State is better off than it was four years ago.

In our hemisphere, the Obama administration has fared even worse,

These are but a few instances of failed foreign policy in Latin America by the Obama administration, and I’m barely getting started. As Professor Jacobson said,

Yet Obama and his campaign team trot out Osama bin Laden to cure all those political ills, and as political cover for a failed presidency.

Again, after four years of a celebrity president, is your life any better? 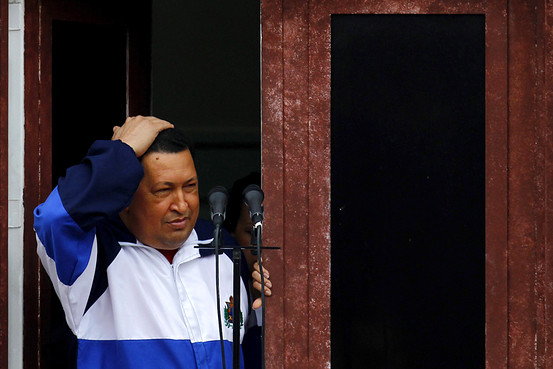 Venezuelan President Hugo Chávez, who can usually count on a well-honed populist touch, may have made a misstep recently as he prepares to rewrite the country’s labor law in May.

Among the various revisions the leftist leader is considering, his proposal to expand government control over severance benefits has roiled the country’s workers, in the public and private sectors, and sent Venezuelan officials backpedaling.

The details of Mr. Chavez’s plans are sketchy but would involve pulling the rainy day money from individual trust accounts in banks and creating a state-managed fund.

As you may recall, Argentina’s Cristina Fernandez did something similar a few years ago.

But Chavez is taking it one step further,

The president would also issue new debt, dubbed “Petrorinoco” bonds and due in 2036, to pay for an increase of the benefit to the public sector that has been pending for more than a decade. Government workers, who are owed an estimated $18 billion, would be required to hold the bond for two years and then have the option to sell it in the local exchange.

But workers, fearful of coming changes, aren’t waiting for clarity, and have started to line up at banks to empty as much as they can of their severance accounts and have threatened to turn against Chavez at the ballot box in presidential elections this fall.

If he lives that long.

Last night I was having a quiet evening at home when the doorbell rang. An earnest young woman was gathering signatures for a petition against fracking. To the best of my knowledge there is no fracking in Princeton (and if there was, I would probably support it), so I told her I wasn’t interested.

She insisted that I sign, since the petition was “against the fracking companies in Pennsylvania sending their radioactive waste to New Jersey.” Again I declined, again she persisted. I wished her a good evening and shut the door. She yelled something to the effect of “the evil must be stopped,” and moved on.

She ought to get a job with Al Armendariz’s Region 6 EPA office:
EPA Official Not Only Touted ‘Crucifying’ Oil Companies, He Tried It

The Armendriz video (which appears to have been taken off YouTube late late night) was shot around the same time he was preparing the action against Range. Here’s the highlights of what he said.

The Romans used to conquer little villages in the Mediterranean. They’d go into a little Turkish town somewhere, they’d find the first five guys they saw and they would crucify them. And then you know that town was really easy to manage for the next few years.

And so you make examples out of people who are in this case not compliant with the law. Find people who are not compliant with the law, and you hit them as hard as you can and you make examples out of them, and there is a deterrent effect there. And, companies that are smart see that, they don’t want to play that game, and they decide at that point that it’s time to clean up.

And, that won’t happen unless you have somebody out there making examples of people. So you go out, you look at an industry, you find people violating the law, you go aggressively after them. And we do have some pretty effective enforcement tools. Compliance can get very high, very, very quickly.

The former professor at Southern Methodist University is a diehard environmentalist, having grown up in El Paso near a copper smelter that reportedly belched arsenic-laced clouds into the air. (Here’s a profile of him in the Dallas Observer.) Texas Monthly called him one of the 25 most powerful Texans, while the Houston Chronicle said he’s “the most feared environmentalist in the state.”

Nevermind that he couldn’t prove jack against Range. For a year and a half EPA bickered over the issue, both with Range and with the Texas Railroad Commission, which regulates oil and gas drilling and did its own scientific study of Range’s wells and found no evidence that they polluted anything. In recent months a federal judge slapped the EPA, decreeing that the agency was required to actually do some scientific investigation of wells before penalizing the companies that drilled them. Finally in March the EPA withdrew its emergency order and a federal court dismissed the EPA’s case

The video has been pulled but you can watch a snippet at a Fox News report,

It is important to grasp why this kind of excessive zeal is the rule rather than the exception from federal regulators, and always will be. Armendariz is wholly typical of the regulator mentality, and we won’t prevent future “crucifixions” until we make fundamental changes to revive the rule of law and restore some kind of democratic accountability to the administrative state.