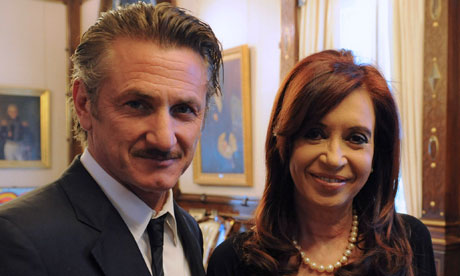 Having bailed water while wearing a flak vest in New Orleans, and kissed Hugo in Caracas, attention whore Jeff Spicoli is looking for pizza in Buenos Aires,

The actor Sean Penn has weighed into the Falklands dispute, urging Britain to join UN-sponsored talks over what he called “the Malvinas Islands of Argentina”.

Penn met Argentina’s president, Cristina Fernández de Kirchner, in Buenos Aires and said: “It’s necessary that these diplomatic talks happen between the United Kingdom and Argentina. I think that the world today is not going to tolerate any kind of ludicrous and archaic commitment to colonialist ideology.”

If only the world would not tolerate any kind of ludicrous and archaic ideology from idiot actors who ignore the fact that the Falklanders consider themselves Brits.