This weekend’s Wall Street Journal has a must-read on drug production in Latin America
Cocaine: The New Front Lines
Colombia’s success in curbing the drug trade has created more opportunities for countries hostile to the United States. What happens when coca farmers and their allies are in charge?
What happens is that now Peru, Venezuela, Ecuador and Bolivia are producing the drugs:

More important, Bolivia and Peru are now making street-ready cocaine, whereas they once mostly supplied raw ingredients for processing in Colombia. In 2010, Peru may have passed Colombia as the world’s biggest producer, according to the U.S. Drug Enforcement Administration. Between 2009 and 2010, Peru’s potential to produce cocaine grew 44%, to 325 metric tons. In 2010, Colombia’s potential production was 270 metric tons.

Meanwhile, Venezuela and Ecuador are rising as smuggling hubs. 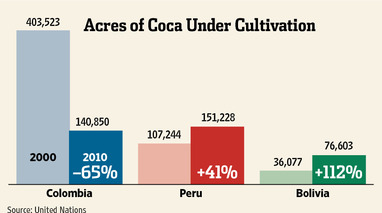 Those of you who think this cocaine is only produced for consumption outside Latin America, do take note that Brazilian police say 80% of that country’s cocaine supply comes from Bolivia.

Noteworthy was a comment by Lebanon’s drug enforcement chief, Colonel Adel Mashmoushi, who stated that one path used by Hezbollah’s drug trafficking friends into Lebanon was “aboard a weekly Iranian-operated flight from Venezuela to Damascus and then over the border [from Syria].” The air bridge between Caracas and Tehran has long been a significant security concern.

Is it a coincidence that Bolivia has the largest Iranian embassy in the hemisphere, and that Ahmadinejad has visited the region five times – last week stopping in Ecuador and Venezuela?

UPDATE,
Linked by Maggie’s Farm. Thanks!