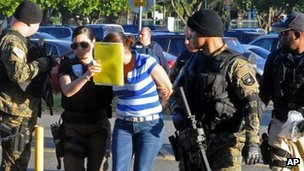 Fifty held for selling US documents to illegal migrants
Fifty people have been held over one of the largest fraud cases investigated by US immigration officials, involving alleged Puerto Rican identity theft.

A suspected network of people in several US states are said to have sold legal documents originating in the US island territory of Puerto Rico in the Caribbean as part of the alleged black-market ring.

Puerto Rican documents were especially coveted because they are legitimate US documents with Hispanic names – and many illegal immigrants to the US are originally from Latin American countries.

Puerto Rico passed a law in 2009 making it mandatory to request new, security-enhanced birth certificates since

According to the U.S. Department of State‟s Bureau of Diplomatic Security, situations in which the birth certificates of Puerto Ricans have been used are the source of approximately 40 percent of the 8,000 cases of passport fraud it has investigated

In the recent raid, the legal documents were being sold for $2,500 apiece.