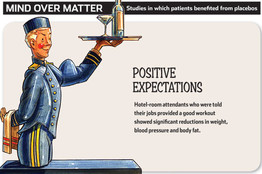 Why Placebos Work Wonders
From Weight Loss To Fertility, New Legitimacy For ‘Fake’ Treatments, and interestingly,

A 2001 study published in Science found that placebo was effective at improving Parkinson’s disease symptoms at a magnitude similar to real medication. The placebo actually induced the brain to produce greater amounts of dopamine, the neurotransmitter known to be useful in treating the disease.

Dopamine is a neurotransmitter that helps control the brain’s reward and pleasure centers. Dopamine also helps regulate movement and emotional responses, and it enables us not only to see rewards, but to take action to move toward them.

Could it be that the patient’s perception of the treatment provided directly affects its efficacy? Would the “bedside manner” directly influence the outcome?

I’m currently reading The Biology of Belief, by Bruce Lipton. The book’s premise is that

that genes and DNA do not control our biology, that instead DNA is controlled by signals from outside the cell, including the energetic messages emanating from our thoughts.

It’ll be interesting to see, as years go on, how science finds this to be.