The WSJ has an interesting article and graph, 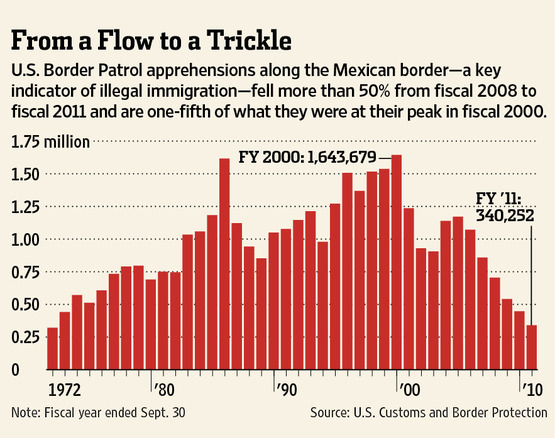 Arrests of people trying to sneak into the U.S. from Mexico have plunged to the lowest level in four decades, the latest sign that illegal immigration is on the retreat even as legislatures, Congress and presidential candidates hotly debate the issue.

Behind the historic drop is a steep decline in the birthrate in Mexico and greater opportunities there relative to the weak U.S. economy. Stepped-up U.S. patrols along the border make it both riskier and more expensive for Mexicans to attempt to enter the country.

Yes, these are all powerful reasons, but I would add another reason: The border smuggling traffic coming from Mexico, be it of people or drugs, is controlled by the drug cartels. It has been that way for several years, particularly for the last four years, and the trend matches that of the above graph. The days where the coyotes were a mom-and-pop business are gone. The cartels control entire towns in the border area.

This would “make it both riskier and more expensive”, and also possibly a longer-term commitment to a criminal organization. That alone may be the most powerful reason, but I don’t have the resources to prove it.