Brazil’s crackdown on drugs continues in preparation for the Olympics, 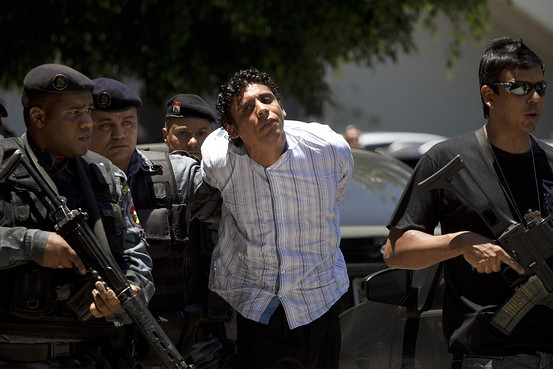 Police captured one of Rio de Janeiro’s most feared drug criminals, the biggest coup so far in the campaign to pacify violent hillside slums before hosting 2014 World Cup soccer tournament and the 2016 Olympics.

Police discovered Antonio Lopes, known in Brazil simply as “Nem,” hiding in the trunk of a sedan in what officials say was an attempt to flee the shanty town, called Rocinha, which sits on a hilltop that divides emblematic beaches such as Ipanema from the part of Rio where most of the Olympic events will be held.

Mr. Lopes’s capture comes as police prepare for an invasion of the slum where he held sway as part of a campaign to make the city safer.

Nem/Lopes, head of a Rocinha drug gang for at least a decade,

became famous across Brazil after he and gang members took hostages in luxury Rio hotel during a botched attempt to arrest him last year in one of the rare occasions that he left his shanty town redoubt.

We’ll see how things turn out once the World Cup and the Olympics are done.