The Road to Rio is America’s Road to Ruin

New Chilean telescopes push the boundaries of astronomy
With two gigantic telescopes coming in the next decade, Chile is gaining a reputation as one of the best places in the world for stargazers.

Six Months for Letting Grandma Do His Laundry

CUBA
Bill Richardson went to Cuba to intercede on Alan Gross’ behalf and was resoundedly turned down: Alberto de la Cruz writes on how the Obama State Dept. authorized Richardson to offer concessions in exchange for Gross

Trips Back to Cuba Draw Fire

GUATEMALA
Big Labor’s Yanqui Imperialism
The U.S. trade representative is trying to deny due process to Guatemala in defiance of free-trade agreement rules.

Cloward-Piven: The Ultimate Goal of Gunwalker?
It’s hard to think of a more logical reason for Gunwalker to exist.

Free speech in Mexico
Be careful what you Tweet

PANAMA
Time for Another Reminder

Chavez is in Cuba for a 5th round of chemo, instead of going to the UN this week. He claims it’s “the last round.” Evo Morales stopped in Caracas and they both flew together.

Since Chavez is not going to NY, Mahmoud Ahmadinejad will visit him in Caracas on his way back from the UN Assembly.

Smoke and Mirrors in the Chavez Revolution: Oil and Research

This is the lawyer of Chavez defending what cannot be defended

The week’s posts:
The AFL-CIO vs. Guatemala
Mexico’s cartels vs bloggers, part 3
Mexican cartels now going after bloggers, part 2
Venezuela to withdraw from the International Centre for the Settlement of Investment Disputes

At The Green Room,
Mexican cartels now going after bloggers

Interestingly, at the same time that the cartels (the Zetas in particular?) are killing bloggers, Startfor reports that on September 8 the Mexican navy dismantled the Zetas’ communication network in Veracruz (link by subscription only).

On the massive raid, the navy seized seven trailers that served as base stations, along with computers, encryption devices, solar cells, and other equipment.

Los Zetas have more sophisticated networks than most cartels due to their origins with the military, and they use their knowledge (and massive proceeds from the drug trade) to avoid regular cell phones and other devices that are easily monitored.

The location of the raid, Veracruz, makes it tactically valuable, for its vicinity to population-dense Mexico City and its financial institutions.

The United States Constitution was signed on on September 17, 1787, by the Constitutional Convention.

Heritage has a video and a quiz

Yesterday I posted on how the Zetas allegedly tortured and killed a man and a woman, who still remain unidentified, for posting on the internet on drug violence in the country.

However, the two victims are not the first bloggers to be murdered because of their posting: Last month Humberto Milan Zalazar, who ran a website, was killed also because of his posting.

The Economist comments on the most recent murders,

It isn’t clear how the killers selected their victims, as such blogs usually allow anonymous comments.

I’ll let the techies discuss how hard or how easy it would be to find the IP address of a post or a comment and compare it to the IP address of a smart phone from someone you have kidnapped. However, it is clear that the narcos are driving their point of dominance by terror.

Mexico is one of the most dangerous places in the world for journalists, and for bloggers.

IN AMERICA, WE HAVE ATTACKWATCH.COM. In Mexico, a deadly threat to ‘scandal mongers’ using social media.

Attack Watch – a White House website that quickly has become a joke – doesn’t disembowel and hang anyone a few miles from the US border.

Folks in Florida not only have to contend with alligators and flying roaches, now they get giant snails, too.

How big are we talking about? THIS big: Giant African land snails can grow to be as long as 8 inches and consume at least 500 different types of plants. They also destroy stucco and plaster.

“They leave excrement all over the sides of houses. They’re very nasty,” Feiber said. “These things are not the cute little snails that you see.”

They also pose a health risk by carrying a parasite that can cause meningitis in humans.

Apparently the snails were smuggled from Africa for religious purposes,

In 2010, officials began investigating Charles Stewart, a man who practices the African religion Ifa Orisha, the Miami Herald reported. Stewart was accused of using the snails in his rituals and

Are you sitting down?

investigators claim an African woman brought them to him by sneaking the snails under her dresses on flights to Miami, the Miami Herald reported.

No word on what her dry cleaning bills are like.

The last time Florida had a snail invasion, it took 10 years to get rid of them.

I wonder if we could ship them to France as escargot.

Mexican blogs Frontera al rojo vivo and Blog del narco are now being hounded by the Mexican cartels:
Bodies hanging from bridge in Mexico are warning to social media users

Social media users who denounce drug cartel activities along the Mexican border received a brutal warning this week: Two mangled bodies hanging like cuts of meat from a pedestrian bridge.

A woman was hogtied and disemboweled, her intestines protruding from three deep cuts on her abdomen. Attackers left her topless, dangling by her feet and hands from a bridge in the border city of Nuevo Laredo. A bloodied man next to her was hanging by his hands, his right shoulder severed so deeply the bone was visible.

Signs left near the bodies declared the pair, both apparently in their early 20s, were killed for posting denouncements of drug cartel activities on a social network.

“This is going to happen to all of those posting funny things on the Internet,” one sign said. “You better (expletive) pay attention. I’m about to get you.”
The gruesome scene sent a chilling message at a time when online posts have become some of the loudest voices reporting violence in Mexico. In some parts of the country, threats from cartels have silenced traditional media. Sometimes even local authorities fear speaking out.

Video below the fold, since it’s gruesome,
END_OF_DOCUMENT_TOKEN_TO_BE_REPLACED 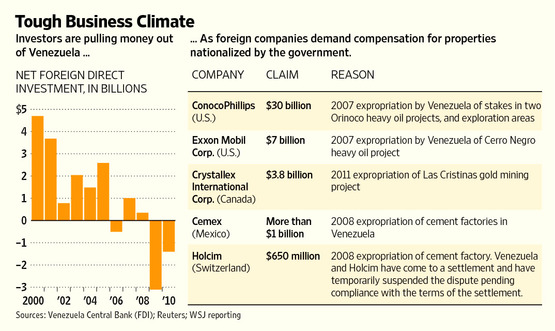