President Hugo Chávez and his Iranian counterpart Mahmoud Ahmadinejad pledged to strengthen political and economic cooperation after they convened a meeting of delegates of both countries that will be held in September in Caracas, the Venezuelan Foreign Ministry said Tuesday in a statement.

In a telephone conversation, the two Heads of State welcomed the progress of bilateral cooperation and “agreed to convene the 7th meeting of the bilateral joint committee (…) in order to broaden and deepen the complementation for the independence and welfare of people,” said the text released by the Venezuelan Foreign Ministry, as quoted by AFP.

A’jad is scheduled to be in New York on September 11.

Hugo’s back in Caracas, from his latest round of Cuban chemo, and looking bloated, 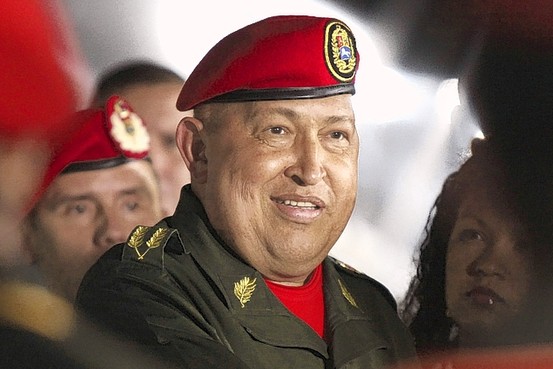 Venezuela plans to transfer billions of dollars in cash reserves from abroad to banks in Russia, China and Brazil and tons of gold from European banks to its central bank vaults, according to documents reviewed Tuesday by The Wall Street Journal.

The planned moves would include transferring $6.3 billion in cash reserves, most of which Venezuela now keeps in banks such as the Bank for International Settlements in Basel, Switzerland, and Barclays Bank in London to unnamed Russian, Chinese and Brazilian banks, one document said.

Venezuela also plans to move 211 tons of gold it keeps abroad and values at $11 billion to the vaults of the Venezuelan Central Bank in Caracas where the government keeps its remaining 154 tons of bullion, the document says.

Venezuela is unusual among countries of its kind in holding so much gold, with the 13th largest gold reserves in the world, according to the World Gold Council (most of the countries ahead of it are in the G10). But this has certainly served Venezuela well: the consistent rise in gold prices has effectively papered over a fall in its reserves this year, despite high oil prices.
Moreover, for Venezuela, whose government rather remarkably seems to be capable of “losing” $29bn, $5bn is small change.

Analysts said the planned move made little economic or financial sense, since Venezuela would be taking its money out of secure banks in safe countries and putting it in countries that are not as safe and perhaps in currencies such as the Chinese yuan or the Russian ruble, which are not reserve currencies. “It’s a big risk,” said José Guerra, a former official at Venezuela’s central bank. Mr. Guerra said he also had heard about the documents whose authenticity was confirmed to him by Central Bank officials.

Could be that Hugo’s getting more desperate as the chemo continues,

Neither Mr. Chávez’s type of cancer nor Mr. Chávez’s prognosis has been made public. Moving the reserves may signal that Mr. Chávez and his associates could be preparing some drastic political moves—such as canceling elections—that could incur international condemnation and perhaps trigger sanctions.

Therefore – since he knows he’s running out of time, he needs the gold and cash right now.

Miguel Octavio is unfazed. One of his commenters speculates,

Is it possible that they are trying to get these reserves into a place where the new government can’t get at them?

This precipitous decision to take Venezuela’s international reserves out of secure accounts in Europe and the United States and move them to China and Russia will likely lead global capital markets to conclude that Venezuela is not a reliable country. Venezuela will no longer have the “international reserves” that are required to sustain any modern economy. The ability of the state-owned oil company, PDVSA, and the Republic to generate capital and attract investment will be seriously affected. And, placing these precious reserves in banks belonging to Venezuela’s biggest creditors in China and Russia may suit Chávez’s friends in those countries, but it is an unacceptable risk for the Venezuelan people.

Why notoriously corrupt leaders would want to get their hands on billions in gold is not a very complicated question. However, it is important to note that one of the reasons cited explicitly by Chávez’s decision document is the possibility that Venezuelan funds or dollar-denominated transactions could be frozen by the United States. Surely, Chávez’s advisors know that U.S. laws allow such sanctions only in the case of narcostates, sponsors of terrorism or mass murderers. We know that Chávez’s brother has pledged an armed struggle to keep power and his army chief has said he would never accept the election of an opposition president next December 2012. But, are Chávez’s would-be successors planning Gaddafi- or Assad-style massacres? If they would go that far, why would they even run the risk of holding a campaign and elections?

The idea that Chávistas would resort to brutal repression or would cancel next year’s presidential elections is unthinkable to many. But, just yesterday, few would have imagined that Chávez and his cronies would have risked the country’s economy and people for his own political advantage and selfish personal interests. If Chavez succeeds in treating the country’s international reserves as a petty cash box or pension fund for his inner circle, Venezuela’s fate will be forfeited to another generation of dangerous leaders.