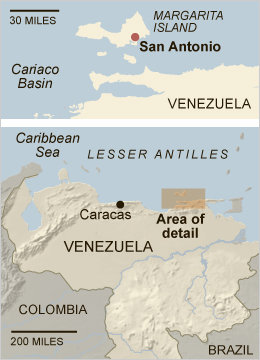 Simon Romero reports on Margarita Island’s San Antonio prison, Where Prisoners Can Do Anything, Except Leave. Conveniently located on ” a departure point for drug shipments into the Caribbean and the United States”, the prison has become “a relatively tranquil place where even visitors can go for sinful weekend partying”.

As long as they don’t mind the assault rifle-toting inmates.

The joint is run by convicted drug trafficker Teófilo Rodríguez, 40, alias El Conejo (the rabbit), who is well versed on his trade, prison etiquette and the kind of institutional corruption that would support an arrangement such that visitors can drop by and buy marijuana and crack and dance by the swimming pool.

I don’t know if Walid Makled will end up there, but if he does, it would be interesting to see how the internal politics work out between the Turk Makled and El Conejo.

As you may recall, Makled said he built his billion-dollar drug shipping empire by paying off some 40 generals in the Venezuelan armed forces. The US did not press for his extradition to the US, and, after all, Margarita is a point of departure for the American drug trade. Will he do time at San Antonio? We’ll find out in time.