The BBC and others are writing about the new book ,
Colombian Farc rebels’ links to Venezuela detailed
New analysis has set out the complex ties between Colombia’s Farc rebels and the government of Hugo Chavez in Venezuela. 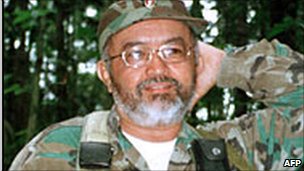 According to the IISS summary,

As FARC’s fortunes on the battlefield waned, the role of the COMINTER only increased in importance as FARC sought to:

and use its border enclaves to deal with a range of actors out of reach of Colombian security forces.
The dossier illuminates in detail FARC’s efforts to develop relationships with the governments and other strategic actors in the neighbouring states of Venezuela and Ecuador. These followed different trajectories and achieved different degrees of success. The relationship with Venezuela ultimately acquired a strategic dimension characterised by various forms of state support, whereas that with Ecuador did not. FARC has suffered many setbacks following the loss of the Reyes archive, and the archive itself has put FARC’s relations with neighbouring states under the spotlight in ways that have significantly constrained the group’s development. But FARC has lived to fight another day, at least in part due to its continued access to cross-border sanctuaries. It continues to pose a threat to the stability of Colombia and the Andean region.

A comprehensive new study of the files found on “Raul Reyes”‘ computer has detailed the intricate relationship between Venezuelan President Hugo Chavez and the FARC, as well as implicating Ecuadorean President Rafael Correa’s complicity in seeking FARC funding, reported various media sources.
…
Although Chavez has long been accused of FARC links, the latest revelations suggest that he actively supported them financially and at one point “promised the group $300 million,” Caracol Radio reported.

Even if this appears to have been an unfulfilled promise, there are said to have been numerous “smaller transfers of money,” contributing to Chavez’s intention to “keep Colombian military strength in the region tied down in counter-insurgency.”

The study does not paint a picture of complete harmony in the relationship between Chavez and the FARC, as he would often betray them at times when it suited his political gain, such as one particular incident whereby the Venezuelan army permitted the FARC’s use of a train, before ambushing them and capturing eight guerrillas to present to Uribe as he met with Chavez in 2002.

Nevertheless, the Venezuelan government is alleged to have asked the rebels to assassinate political opponents in Venezuela, as well as to train urban militia groups and serve as a shadow militia for the country’s intelligence apparatus, reported the New York Times.

The analysis notes how with Chavez’s various calls for the FARC “to abandon armed struggle…he did so only to deflect international pressure,” which is just one element of the oscillating Chavez-FARC relationship that led the IISS to cast doubt on how “durable” the recent rapprochement between Colombia and Venezuela can really be.

Ecuador, another neighboring country who are presently improving relations with Colombia, are also implicated in the book. Having broken relations with Colombia following the 2008 raid into their territory that delivered the very same FARC computers, ties were only restored with Colombia in November 2010.
…
Although Correa was only indirectly implicated at the time, the analysis of Raul Reyes’ computers has led the IISS to conclude that he “personally requested and illegally accepted illegal funds from the FARC” in 2006, even if in Ecuador the guerrillas never received a “comparable state of support” as in Venezuela.

However, it’s Simon Romero of the NYTimes who spells it out on the headline, Venezuela Asked Colombian Rebels to Kill Opposition Figures, Analysis Shows

Colombia’s main rebel group has an intricate history of collaboration with Venezuelan officials, who have asked it to provide urban guerrilla training to pro-government cells here and to assassinate political opponents of Venezuela’s president, according to a new analysis of the group’s internal communications.

The analysis contends that the Revolutionary Armed Forces of Colombia, or FARC, was asked to serve as a shadow militia for Venezuela’s intelligence apparatus, although there is no evidence that President Hugo Chávez was aware of the assassination requests or that they were ever carried out.

Chávez, however, lent the FARC money, and there is direct evidence of it.

A meeting described in the book shows that Mr. Chávez was almost certainly unaware of the Disip’s decision to involve the FARC in state terrorism, but that Venezuelan intelligence officials still carried out such contacts with a large amount of autonomy.

Drawing from the FARC’s archive, the book also describes how the group trained various pro-Chávez organizations in Venezuela, including the Bolivarian Liberation Forces, a shadowy paramilitary group operating along the border with Colombia.

FARC communications also discussed providing training in urban terrorism methods for representatives of the Venezuelan Communist Party and several radical cells from 23 de Enero, a Caracas slum that has long been a hive of pro-Chávez activity.

The book also cites requests by Mr. Chávez’s government for the guerrillas to assassinate at least two of his opponents.

Later in the article, Romero quotes a FARC member who found the Venezuelans deceitful.