Following a short-lived, albeit modest, display of gonadal fortitude, the Obama administration is back to appeasing Hugo Chavez.

Appeasement never works, but the Obama administration keeps trying, and a picture says a thousand words.

First there was that time in Trinidad where Obama, like Ezio Pinza sang in South Pacific, some enchanted evening ran across a crowded room to shake hands with Hugo. Remember? The Obama administration back then “reset” US-Venezuela relations by reinstating the ambassadors: in 2008 Venezuela had expelled Ambassador Patrick Duffy, and Bernardo Alvarez Herrera was consequently expelled from the US.

This time Chavez said that Larry Palmer, the Obama administration’s Ambassador to Venezuela, would not be allowed to take his post, so the US revoked Alvarez Herrera’s visa. Obama supporters who hurl accusations of racism towards anyone who does not agree with Obama’s decisions remain curiously silent. 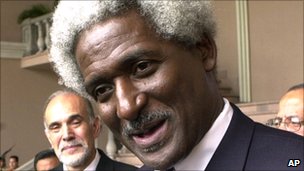 In the meantime, Venezuelans are bearing the latest currency devaluation.

So in the middle of all this, US Secretary of State Hillary Clinton went to the inauguration of former terrorist Dilma Rousseff as President of Brazil, and of course Hugo managed to take advantage of the opportunity for another photo-op.

Who would have thunk it?

“They talked and smiled, at least for five minutes. It looked like a social conversation, both were smiling,” a Brazilian official who witnessed the encounter told AFP on condition of anonymity.
…
At one point, Chavez extended his hand to Clinton, who shook it, smiling. They chatted for a few minutes before moving on to formally greeting Rousseff.

Five minutes, to be exact.

Here are the photos,

Love is in the air

Hugo even got bragging rights,

“We greeted each other. (Clinton), I think, was entering the room. She had a very spontaneous smile and I greeted her with the same effusiveness. … It was a pleasant moment. We spoke about two or three specific things,” Chavez told VTV.

Whatever the topic was, Hillary had a grand ole time,

That was a humdinger!

It even looked like it went so well Hugo had Hillary begging for more,

In short, yet another instance where we, the American people, can rest assured we’re in the best of hands.