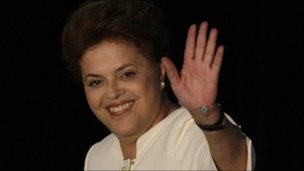 At the Beeb:
Rousseff falls short of outright win in Brazil election
Supporters of Jose Serra wave flags after hearing that he goes to the second round, 3 October 2010 For Serra’s supporters, a second round is an achievement in itself

Brazil’s presidential election will go to a second round after Dilma Rousseff failed to gain the 50% of votes needed for an outright victory.

With 98% of votes counted, President Lula’s former cabinet chief has 47% with Jose Serra trailing on 33%.

The two will contest a run-off vote in four weeks’ time.

A strong showing by the Green Party candidate, Marina Silva, who polled 19%, may have cost Ms Rousseff a first-round win.

At the WaPo:
Backed by Lula, Rousseff ahead but faces runoff in Brazil’s presidential vote

With 99.8 percent of the votes counted late in the evening, Dilma Rousseff, 62, a Marxist guerrilla-turned-economist who served Lula as chief of staff, had nearly 47 percent, to 32.6 percent for Jose Serra, a former governor who is her main challenger. A third candidate, Marina Silva, the Green Party candidate and a former environmental minister in Lula’s government, had 19.3 percent.

Steve Kingstone speculates on why Dilma didn’t get the outtright majority right away,

What happened? A critical mass of support seems to have fallen away in the days immediately before polling – partly the consequence of a corruption scandal involving a former adviser, and partly the fall-out of a row over Dilma’s stance on abortion.

Evangelical Christians reacted badly to reports that the presidential favourite planned to liberalise Brazil’s strict abortion law – a claim she denied – and some appear to have shifted their loyalty to the Green Party candidate, Marina Silva, who is herself a devout evangelical Christian.

That may be the case, but as PoliBlog put it,

unless she shoot a man in Reno (or in this case, Rio) just to watch him die, she’s in.

That is testament to Lula’s popularity – considering that Dilma has never held elected office.

The daughter of a middle class Bulgarian immigrant and a schoolteacher in Belo Horizonte, southeastern Brazil, she realised upon leaving a privileged school that the world was “not a place for debutantes”.

She was 16 when Brazil fell prey to a military coup in 1964 and like many was soon drawn into the world of underground opposition.

Introduced to Marxist politics by the man who became her first husband, Claudio Galeno, she helped build up one of the guerrilla organisations trying to overthrow the government – at one point spending three years in prison.

After democracy was restored she had a daughter, Paula, now a 33-year-old lawyer, with her second husband Carlos Araújo, a revolutionary leader who had met Fidel Castro and Che Guevara. She trained as an economist she entered conventional left-wing politics and professional public service.

In 2001, by now divorced again, she joined Lula’s Workers’ Party and her experience in the country’s energy ministry quickly impressed the new president. A cabinet job as energy minister followed before she was appointed his chief of staff in 2005.

But many have questioned how she can be running for the presidency.

Critics say she was simply the last senior Lula crony standing since one aide after another was forced to quit in scandals over alleged slush funds, bribery or blackmail – including, last week, her own former aide who had followed in her footsteps as Lula’s chief of staff.

Her lumbering speaking style and lack of personal charisma do not make her an obvious candidate and – in what was seen as a thinly-veiled attempt to protect Ms Rousseff – the government made it illegal for television and radio broadcasters to make fun of the candidates.

In effect, Brazilians have voted for a third Lula term, while we wait to see what Lula is planning for himself over the next four years. After Dilma’s term, he’s eligible to run for the presidency again.