I’m truly enjoying my trip to Buenos Aires, Argentina, and have a brief post:

Clarin, the newspaper whose stock went up by 50% the day after Kirchner’s death, has these two top headlines today (all links in Spanish):
Cristina returns today and shows strength: “The President will resume her full schedule tomorrow. Tuesday she’ll be at a business event in Cordoba. She will start her tour of Asia on Friday where she’ll attend the G-20 meeting.”

The poster above is one of thousands printed, distributed, and pasted on every corner of the city by the government the day after Kirchner’s death.

Today is Brazil’s runoff election:
Brasil’s ballots: Surveys confirm Dilma as the favorite. “Results were released this morning and show she will obtain between 55-56% of the vote against her Socialdemocrat rival Jose Serra.”
I know a guy named Jose Serra who is neither Brazilian, nor politician nor socialdemocrat.

Internet connections are iffy, so posting will continue to be sporadic, but I see that in the States the Jon Stewart rally went entirely as expected.

I’ve been traveling for the past few days and my current location is Buenos Aires, Argentina.

The big news today, Census day, is the former president Nestor Kirchner died of a heart condition this morning. 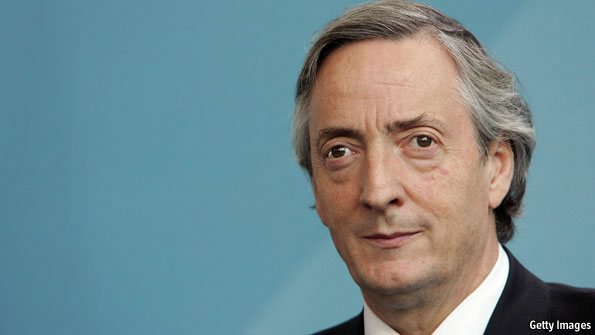 The Financial Times reports that

Argentine stocks saw their biggest rise in two years and benchmark sovereign bonds soared after Néstor Kirchner, 60, the former president and husband of current president Cristina Fernández, died of a heart attack and investors bet that the country’s “Kirchner era” was drawing to a close.

The funeral will start tomorrow, followed by a private burial on Friday at his hometown of Río Gallegos.

The Economist has an interesting post on Kirchner’s effect on Argentina’s politics.

As stated by that arm of the Vast Right Wing Conspiracy,

Does that makes 60 Minutes irrational?

Record-high government spending, a hostile tax environment for individuals and corporations, takeovers of large sections of the economy (mortgages, automakers, healthcare), and protectionistic policies are a recipe for disaster. Unfortunately they also are the Obama administration’s economic agenda.
The tempting path of protectionism
Smoot-Hawley ended up burying American exports

The Obama administration is playing with fire when it tries to bully other countries like Mexico and China to satisfy protectionist interest groups in the United States.

It might be worth recalling how the Tariff Act of 1930 – still the statutory basis of U.S. trade policy – increased costs for consumers and businesses, devastated trade and plunged the Western world deeper into the depression that was already under way. Focused exclusively on domestic politics, President Hoover and members of Congress triggered an international catastrophe.

The article describes the effect on other countries. The effects today would be equally disastrous.

Joe Biden claims the Republicans are spending $200 billions in ads:

In an interview with Al Hunt of Bloomberg News scheduled to be shown Friday night, Vice President Joseph R. Biden Jr. commented on the need for disclosure when corporate interests contribute to political groups.

“I was amazed at the amount of money, this $200 billion of money that is — where there’s no accountability,” he said. “When I say accountability, we don’t know where it’s coming from. There’s no disclosure, so the folks watching the ad can’t make a judgment based upon motive when you say it’s paid for by so-and-so.”

Slip of the tongue? Typo? Not quite: Gaffe-stastic Joe repeated himself,

“So it really — I’ve never seen this before, so the only caveat I’d put in terms of the House is how much impact this $200 billion are going to mean.”

Here he is on video

A billion here, a billion there, Joe?

The biggest threat now comes from organised crime, whose attacks against journalists often have the aim of inducing self-censorship. Mexico has become especially dangerous. According to the Committee to Protect Journalists (CPJ), a New York-based organisation, at least 37 media workers have been killed or gone missing in Mexico since 2006. Most of the crimes have taken place along key drug-trafficking routes.
…
The second big threat to the media comes from governments. With the notable exception of the post-coup regime in Honduras last year, the principal offenders have been populist, left-wing elected leaders. When media outlets oppose such rulers they often face harassment.

Rob Reiner: You know what this tea party movement reminds me of? Nazism

we’ll linger in Hollywood just a bit for some comedy gold from Rob Reiner. Yes, the actor turned director turned anti-smoking obsessive quasi-government official gets his inner Garofalo on and has the Orwellian — and staggeringly clapped out — observation that the folks who want to shrink government and reduce its interference in our daily lives are secretly the folks who in the 1930s built one of the most massive welfare states of all — and I don’t mean FDR.

Hitler promised health care, said that Germany’s business infrastructure needed a total government reform, and promised that all of the Germans would have jobs. Also, Hitler may have been elected by less than 40% of the people in Germany, but he was elected by 98.8% in Austria. After becoming Chancellor of Austria he took over the health care system, the car company (Austria had one major car manufacturing company at the time), and the business infrastructure.

Or to borrow from Ameripundit, “Nothing says National Socialism like a bunch of limited government, anti-central authoritarian activists who despise nationalization and the running of other people’s lives.”

The other day I was posting about Obama’s statement that a nuclear Venezuela is fine by him.

Why is he mistaken?

Claudia Rossett spells it out,
Obama and the Axis of Chavez

In this case, Venezuela’s deal for a nuclear reactor emerged from a visit just paid by President Hugo Chavez to Moscow, as part of a ten-day trip to Belarus, Russia, Iran, Syria, Libya and Portugal. Setting aside Portugal, does anyone in the White House notice a common theme to this itinerary? Chavez is making yet another tour of an axis of despotisms. This gang runs the gamut from weapons dealers to sponsors of terrorism to nuclear proliferators — past, present and future. This is not the itinerary of a democratic leader shopping for technology to enhance the electricity supply of a free and happy citizenry back home. If your grandmother were to take off on a 10-day deal-making spree through Minsk, Moscow, Tehran, Damascus and Tripoli, you’d be right to wonder what she was really up to. When Hugo Chavez does it, it is head-spinning irresponsibility of the first order for the White House to entertain even for a split second the idea that this has anything to do with “peaceful” nuclear power.