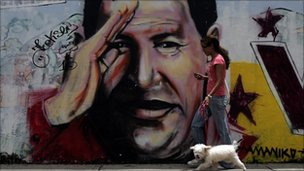 Can a ruling Communist be defeated through electoral means? We’ll soon find out:

Venezuelans go to the polls to elect parliament

Long lines began forming in the predawn hours in parts of Venezuela Sunday as the nation of 27 million turned out to elect all 165 members of its National Parliament, where both President Hugo Chávez and his rivals are vying for control.

Television stations reported some of the 12,400 polling centers were late to open. But there were no immediate signs of major problems. Two nights of heavy rains killed at least seven people and washed out some roads. But the weather was not expected to interfere with the vote.

About 130,000 troops were guarding the process, the armed forces said in a statement. Despite warnings earlier that saboteurs might try to disrupt the power grid or transportation infrastructure, armed forces chief Henry Rangel Silva was quoted as saying there were no signs of security risks.

Even so, the government shut the border with Colombia for 24 hours until 8 p.m. Sunday. The decision was made to “avoid any problem that might disrupt the electoral process,” Rangel said.

Some 17.7 million people are registered to vote in Venezuela and analysts expected the critical nature of the race to drive turnout.

The election pits Chávez’s Unified Socialist Party of Venezuela, or PSUV, against a Unity coalition of opposition forces.

Chávez is hoping to hold onto the two-thirds majority he needs to have his initiatives rubber stamped and set the stage for his 2012 presidential bid.

The opposition, which boycotted the 2005 elections, is seeking to flex its political muscle and win enough votes to prove that it can be a viable alternative to Chávez’s 12-year rule.

Pollsters say the two sides are within a few points of each other in the race for votes. However, new voting districts and changes in the electoral law are expected to give the ruling party an edge in the assembly’s elections.

The Economist asks,Will a midterm election dent the president’s power?

Al Jazeera reports on the changing situation in the slums, formerly monopolized by Chavistas,

In Venezuela, online networks drive politics
With one of the highest Twitter-usage rates in the world, Venezuela’s political campaign rages onlne. You can follow the election day tweets here: http://twitter.com/#search?q=%23S26