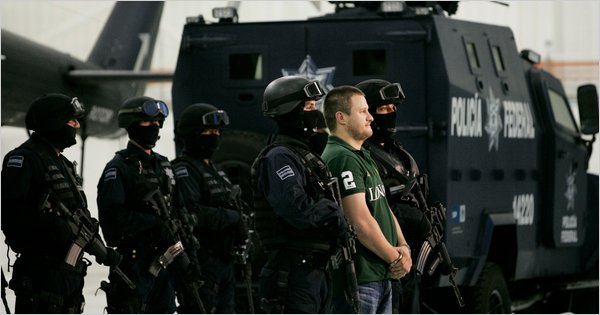 The New York Times has a report on US born and raised Edgar Valdez-Villareal, known as La Barbie, the U.S. Student who Became a Mexican Drug Kingpin

He is the only American citizen known to have moved so high in the command structure of the Mexican cartels.

Five years ago, Mr. Valdez played a key role in the battle between the Sinaloa Cartel and the Gulf Cartel for control over the lucrative I-35 smuggling route into the United States, the Drug Enforcement Administration says.

He is also believed to be the person most responsible for pushing that conflict into central and southern Mexico, taking over the city of Acapulco.

Last week, Mr. Valdez was captured by dozens of federal police officers after a firefight at a rustic house in the mountains northwest of Mexico City. He had eluded the authorities for years despite having multimillion-dollar bounties on his head, and his capture was considered a major blow to the remnants of the Beltrán-Leyva organized crime group, law enforcement officials said.

For months, Mr. Valdez had been fighting for control of the gang since its leader and his mentor, Arturo Beltrán Leyva, was killed in a gun battle with the Mexican Marines last December in Cuernavaca, just south of the capital.

The internecine struggle had pitted Mr. Valdez against Mr. Beltrán Leyva’s brother, Hector. More than 150 people have died in the struggle, many of them mutilated or beheaded and left with grisly messages for the other side.

In videotaped statements to the Mexican police, Mr. Valdez said that he managed a smuggling route from Panama to Mexico and that he transported cash in tractor-trailers back from the United States.

He also admitted that he had ties to many of Mexico’s most wanted drug lords, including Joaquín Guzmán, who has emerged from the last three years of gangland warfare as the most powerful cartel leader in Mexico.

And a total sociopath.

The NYTimes portrays him as “sucked up” into the drug war:

After graduation, Mr. Valdez turned down an offer from his father to attend college, saying he wanted to make money, his brother said. According to a federal indictment in Laredo, the next year he joined a group of smugglers who were moving hundreds of pounds of Mexican marijuana through Laredo to cities in Massachusetts and Missouri.

His brother said Mr. Valdez fled across the river into Nuevo Laredo in 1998 to avoid arrest, opened a small shop and never lived in the United States again. Detectives in Laredo say he quickly became affiliated with a local gang known as Los Chachos, one of four groups that controlled the city’s drug trade in those days.

Over the next years, the Gulf Cartel and its commandos, the Zetas, moved into Nuevo Laredo and started taking over the drug and extortion rackets from local gangs. Mr. Valdez was sucked up into the conflict.

Instead of simply “sucked up”, Valdez is a ruthless killer

By 2003, Mr. Valdez had been placed in charge of Mr. Beltrán Leyva’s squads of hitmen, known as Los Negros, law enforcement officials say. And a year later, he took over the gang’s operations in Acapulco, eventually pushing the Zetas of the Gulf Cartel out of the city with a bloody campaign that included beheadings and grenade attacks on police stations, Mexican officials said.

The war rages on.