Hugh Hewitt eats Gloria Allred’s lunch; Meg Whitman Found Out Her Maid Was Illegal And Very Properly Fired Her, So It’s Like A Big Scandal We Should All Be Upset About Or Something

Over in Ecuador, Rafael Correa Claims Ecuador Coup Attempt After Scuffling With Police, who are upset about his cutting their salaries

Ecuador President Rafael Correa said he is the target of a coup attempt after police and soldiers protesting wage cuts assaulted him during a demonstration in Quito.

“We’re faced with a permanent conspiracy,” Correa, holed up in a hospital surrounded by demonstrators, said in a telephone interview with Radio Publica after protesters hurled water at him and burnt tires outside the presidential palace.

A conspiracy in his own folly. (h/t Vlad)

Spain is broke. So they go on strike.

An inflexible job market and a popped property bubble have left Spain with little choice but to make painful cutbacks. As part of an ongoing in-depth series on the European financial crisis, WSJ’s Andy Jordan and Joe Parkinson report from the Iberian peninsula.

First time I hear the phrase “fresh legs” in this context:
Spokesman: Obama may get chance to add more ‘fresh legs’ at White House

“At the end of a president’s first two years in office, there are often changes that occur,” Burton explained on the liberal Bill Press radio show. “There’s going to be a lot of different things the president will have the opportunity to inject some fresh legs and ideas.”

Did the phrase “fresh legs” come up because of former ballet dancer Rahm Emanuel’s upcoming departure?

Is it to avert voters’ voting with their feet?

Or is Obama starting a new stimulus by bringing in great legs to help him tap dance on the issues?

Here’s a pair of “fresh legs and ideas” sure to get the Dems in a huff:

Your stimulus dollars at waste:
New Yorkers outraged as bureaucrats order city to change lettering on every single street sign

The city will change the lettering on every single street sign – at an estimated cost of about $27.5 million – because the feds don’t like the font.

Street names will change from all capital letters to a combination of upper and lower case on roads across the country thanks to the pricey federal regulation, officials said Wednesday.
…
The city has about 250,000 signs, and it costs about $110 to replace one, the DOT says. Officials said the new signs will have improved reflectivity and clarity for nighttime drivers.

Which makes it easier for the cab driver who is not literate in English to take you to the wrong spot all the same.

By the way, if you think the numbered streets don’t get new signs, you are wrong. They’ll be changed, too, at $110 a pop:

The new regulations also require a change in font from the standard highway typeface to Clearview, which was specially developed for this purpose.

As a result, even numbered street signs will have to be replaced.

Is There No Detail Too Small For The Feds To Regulate? Of course not. The purpose of a government bureaucracy is to perpetuate itself through petty regulation.

Today at 11AM Eastern, Venezuelan blogger Miguel Octavio talks about Killer Facts About Venezuela’s Parliamentary Elections, and what election day was really like.

You can listen to the live podcast, or at your convenience, here.

there are several scenarios under which Chávez could bend Venezuelan laws — as he has often done — to maintain his near absolute powers:

• Scenario 1: Chávez uses the outgoing National Assembly, which he fully controls until the newly elected legislators take their seats on Jan. 5, to pass an “enabling law” that grants him extraordinary temporary powers. He and previous Venezuelan presidents have done this.

• Scenario 2: The new National Assembly takes office Jan. 5. and Chávez no longer enjoys a two-thirds majority to rule at his will. But Chávez, through vote buying or intimidation, gets the votes he needs to get the new congress to pass an “enabling law.”

• Scneario 3: Chávez asks the Supreme Court, which he controls, to issue a ruling scrapping the two-thirds vote requirement and to allow him to pass key laws by a simple majority vote.

• Scenario 4: Chávez gives legislative powers to pro-government community councils, in effect stripping away the powers from the National Assembly.

He has done something similar before: When opposition Caracas Mayor Antonio Ledezma won in the 2008 elections, Chávez created an office of super-mayor of Caracas, appointed a loyalist to head it and shifted most of the opposition-held mayoral office’s duties and budget to the new office.

At El Universal:
Venezuela’s government to speed up socialist model
Oil workers think that the revolution is weakening 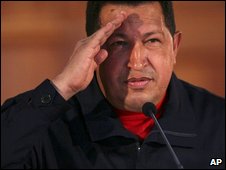 Venezuela’s opposition made big gains in legislative elections on Sunday. But while it appears to be a victory for democracy, Hugo Chavez always finds a way to ensure it won’t be meaningful for anyone but himself.

One of the means is a lame-duck legislative session: Caracas Gringo posts on communal laws:

Once the communal laws still awaiting approval are enacted by the current assembly, there isn’t much that the new assembly can do about it.

Chavez may not have his 2/3 + 1 “qualified majority” that allows him to do anything he wishes. But the opposition doesn’t have sufficient votes in the new assembly that sessions as of 5 January 2011 to roll back any laws approved by the current assembly during the coming 100 days.
…
…if 100% of the regime’s new federal/communal structure is firmly in place legally before end-2010, Chavez may decide to ignore the new assembly, or perhaps fiscally strangle the opposition’s districts, or order his AG and his Sebin (formerly Disip) political cops to persecute select opposition figures.

Meanwhile, Reuters reports that the opposition is seeking greater transparency on oil revenues. (link in Spanish)

A small-town mayor and an aide were found stoned to death Monday in a drug-plagued western state, the fifth city leader to be slain in Mexico since mid-August.

Michoacan state Attorney General Jesus Montejano said the bodies of Tancitaro Mayor Gustavo Sanchez and city adviser Rafael Equihua were discovered in a pickup truck abandoned on a dirt road near the city of Uruapan.

Montejano’s spokesman, Jonathan Arredondo, said initially that the victims were hacked to death with a machete, but the attorney general said they were killed with stones.

Vlad Tepes first brought this story to my attention; the method of killing brings to mind Iranian stonings.

In any case, the fact remains that border security is national security – a point that I have made time and time again in my podcasts and posts at this blog and elsewhere.

John Hinderaker is as puzzled as I when it comes to the general public (emphasis added),

The situation in Mexico is a disaster, and one that directly threatens our national security. For reasons that I don’t understand, most Americans don’t seem to care, and the Obama administration reflects that apathy. Mexico makes Iraq look like Switzerland. Iraq is, I think, important to our security, but Mexico is much more so. I don’t know what the solution is–other than the obvious, a massive application of police/military force to kill the criminals–but at a minimum, we should take notice.

No, just take from anyone earning a salary, and give all to the government:
Walloping the Middle Class
The Democrats’ tax punt may mean that a family of four with an income of $45,000 will pay $2,083 more in taxes.

The Tax Foundation has run the numbers and the tax hikes coming down the road are eye-popping. Take a school teacher married to a bus driver, with a combined income $120,000 and two kids. Only Nancy Pelosi would consider them “rich,” but their income taxes will go up $4,499 next year, even before any potential AMT penalty, which could add several thousand dollars to their tax bill.

Now: Eliot Spitzer is a host on a CNN show.

Then: CNNers Derided Eliot Spitzer as a ‘Self-Righteous,’ ‘Holier-than-Thou’ ‘Narcissist’ with ‘No Remorse’
Rich Noyes has a video collection: